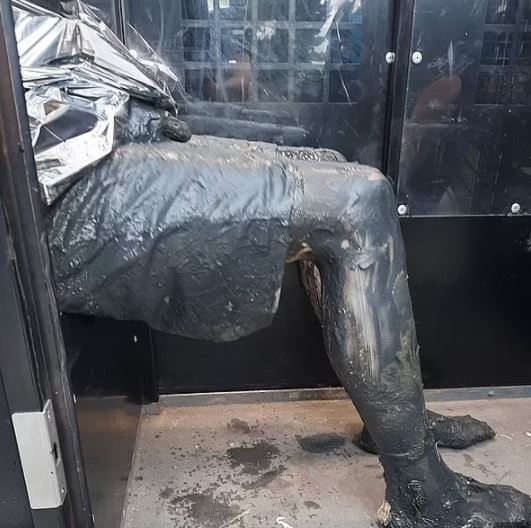 A 16-year-old boy who led police on a car chase and fled on foot across mudflats ended up covered head to toe in mud and swaddled in an emergency foil blanket.

Officers shared photographs of the teenager wrapped in the silver blanket on social media after he was arrested for drug-driving in Hayling Island near Portsmouth.

Two officers from Hampshire Constabulary attempted to stop the Vauxhall Astra on Saturday evening but, when the car hit a wall, the teen left the vehicle and ran to the mudflats at Langstone Harbour.

Firefighters and coastguard attended the scene after he entered the mudflats and shortly after, the teenager, from nearby Emsworth, handed himself in.

In a tweet, one officer wrote: ‘Brief pursuit in a vehicle, followed by some extremely unusual effort to evade us in a foot chase. 20 minutes through bushes and then into the mudflats at Langstone.

‘Driver detained and requiring a shower.’