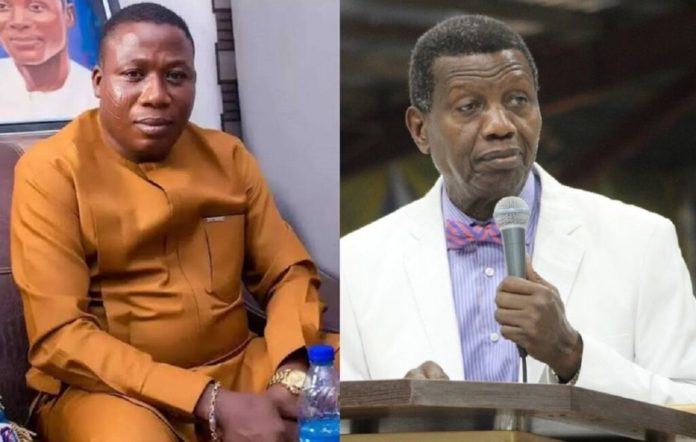 Yoruba activist, Sunday Adeyemo aka Sunday Igboho, has mocked the General overseer of the Redeemed Christian Church of God RCCG, Pastor Enoch Adeboye, over the sudden death of his son, Pastor Dare Adeboye.

In a live session on Facebook with his publicist, Olayomi Koiki, Igbogho did not mince words as he mocked Adeboye over his loss. According to the activist, Adeboye who is an elder states man in Yorubaland has been silent as Fulanis have continued to kill men and women in Yoruba land.  He said he would not ”greet”  or sympathize with Adeboye because the clergyman doesn’t support the call for a Yoruba nation.?
?
?

“Has Baba supported the Yoruba nation that we will now be greeting him? We don’t need to greet Adeboye. What is my own with that? We are not doing church here. This is not religion. ?
?
Pastor Adeboye didn’t speak about the Yoruba nation. Look at the number of crowd in Baba Adeboye’s church. Is he not supposed to tell all of them to join the Yoruba nation? We don’t need to greet him. ?
?
God himself will start asking questions from all the enemies of the Yoruba race. By the grace of God, anybody who says Yoruba will not get to the promised land, God will kill their children and wives and their entire family.” ?
?
Anybody who does not support the Yoruba nation, those who have powers, be it, pastors or anybody that has the followers, but does not support Yoruba nation, God I call on you; you’re the one who owns me and the creator of everything. ?
?
Those elders who see our sufferings, who see that the Fulanis are kidnapping us and collecting ransom, but choose not to support us, as you kill their children, kill their wives. So shall it be!” a visibly angry Igboho said

Watch a video of him speaking below

The video of Sunday Igboho saying he won’t send any condolence message to Baba Adeboye about the death of his son pic.twitter.com/f6SEteIQsb