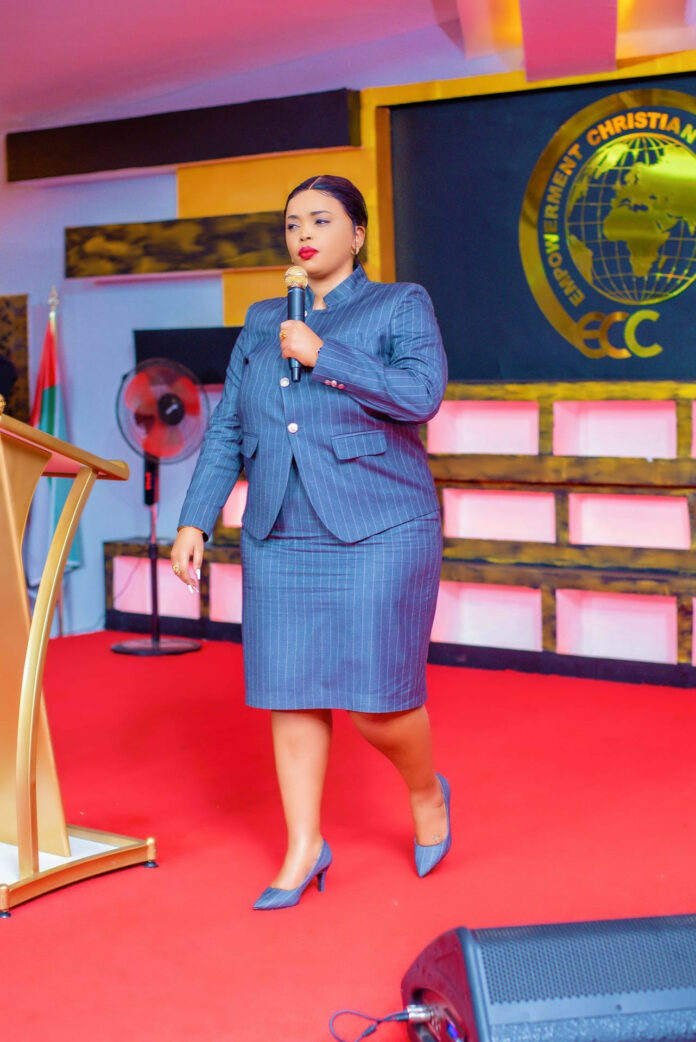 This comes after the now former church member who goes by the Facebook, Martha Mwihaki Hinga, on Tuesday, June 29, claimed that Rev. Natasha invited her for dinner together with the Nigerian Evangelist.

According to Mwihaki, Rev. Natasha and her mother and the brother left leaving her with her aide and the Nigerian guest preacher.

She further claimed that the Nigerian preacher asked them to pray together but instead both allegedly sandwiched her.

The allegations soon went viral on social media prompting the clergywoman to issue a statement on Wednesday, June 30.

The statement posted on her social media pages by her communition team said the allegations are malicious plans aimed at tarnishing the reputation of the Empowerment Christian Church leader.

“As a ministry that is very active in preaching through various social media platforms, we seek to unequivocally dissociate ourselves with a malicious story tarnishing the reputation of our leader Rev Natasha and the ministry we are doing,” the statement read.

“We began our Miracle Monday Services in October 2017 and the same has been publicly broadcasted on our official handles. In the greatest words, the story and expose going round is totally false, unfounded, and out there to disparage our mandate.

“It’s worth noting that the said Martha Mwihaki Hinga is a Pseudo account that has now deactivated; she and/or her cohort has never been part of us. We wish to categorically state that we are a ministry committed to maintaining Biblical standards both in Theology and Practice. We are above board and deal with all attendees, members, public with utmost respect and integrity.

“Our church Empowerment Christian Church ECC remains a beacon of hope, an oasis of God’s love, and a sanctuary of worship, prayer and the Bible.

“To all the friends of ECC, Sons and daughters across the nations, partners, Natasha Hands of Compassion Team members continue keeping us, the Oracle in prayers as we continue shining the banner of God’s love to all. 2 Timothy 3:12 “And all who live a godly life in Jesus Christ shall suffer persecution.” 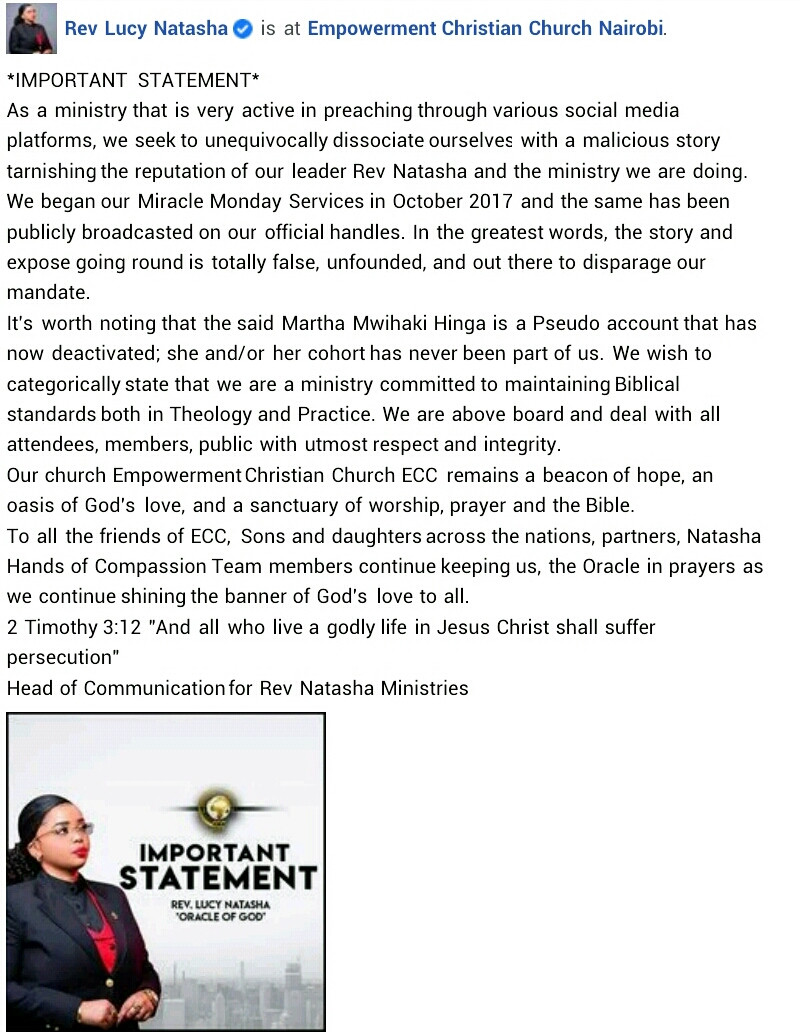 Below are details of the expose:

PART ONE
I met Reverend Lucy Natasha after a friend of mine introduced me to her church in early 2014, just about when she officially began to house most of her services, mid-week and Sunday Services at Six-Eighty Hotel.

I used to see her on social media but that was it, nothing much, apart from her usual contextualization of prosperity gospel to excite her fanatic congregation, because those are usually not Christians in pursuit of the true gospel.

Just like Now, she still had a palatial state of the art office setting marked with weird arts, Portraits of popular Nigerian Televangelists, I remember that of the Late TB Joshua, a 6-inch red carpet and very fine men frequenting her office, I later learnt that they were her protocol and handlers. I was a little bit shocked because I am not a big fan of Nigerian pastors, I actually don’t trust them. My friend who took me there was constantly gazing at me because I appeared skeptical over everything, especially the portrait of a known controversial pastor TB.

She loves calling people daughter, so she stretched her hand and reached out to me, “Good afternoon my beautiful daughter, Of course my age not withstanding I agreed and responded. I am way older than her, I dubiously smiled and responded “Good afternoon my spiritual mom, although physically I may be your mom. “She has a very good voice, so she smiled and the exchange of pleasantries was done.

I partly introduced myself and expressed part of the reason why I was there, I however, insisted that it is my friend who persuaded me to see her because she felt that I would fit into her ministry as a deacon taking into account my passion for God’s work and at the time I needed a place to worship and initiate my ministry work. She looked elated and clumsily said that I was at the best place.

Now, there’s this brother of him, who has some slippery hair, that guy was then the P.A. She called him and in he came with a 3-page form for registration. I was then requested to follow Rev in a small private extension for sort of some grilling or up-close, a very small extension that could only fit two persons. She asked me to get off my shoes and enter. I think that was now the beginning of my indoctrination to a “cult”.

I started filling details on the sheet she handed to me. I was putting on my details as I popped my eyes on and off to her just to monitor things. My friends mimi hata mwanaume hajaniangalia na macho nikablush.The gaze was very very veeery suggestive, Well I ignored because I assumed that was her nature, well she’s pretty and that’s not a far-fetched habit by beautiful girls. I filled the form while still throwing my eyes randomly on her, to signal either I needed to consult on something but that was in guise of trying to angalia vile kunaenda.

Suddenly, I felt something chilling down my body. Have you felt cold, then a petrifying thing runs down your spine? That is what I felt and the next thing was Rev asking me to get close to her for prayer. I actually hadn’t completed the form, but I was on my feet moving towards Lucy after that wave on my body. I then immediately closed my eyes and opened them, Alas the person next to me was not her, this was her mother (You know how close they are with the mother), Reverend was not there. I have NEVER ever seen that.

I remember trying to scream but the voice wouldn’t be audible, you have tried to scream in your dreams and the only thing that comes out is a distant feeling of shouting but the actual shout not being projected, that was it. The person now next to me (the mother) started speaking in weird voices asking me to “Tulia Tulia,Kuna Roho anasema wewe ni mtumishi”As she was saying that, weirdly I was being caressed and fondled by someone I couldn’t see. The feeling was so strong that I actually started getting too close to the mom praying for me. For now handle that I will be back.

PART TWO
That was weird because in my entire years of allegiance to Christ I have never felt that. I have never seen that. Let’s just say the feeling was way too ungodly as a happenstance between a prayer session. When I partially began to realize I was in between something not so nice, I began to battle out the grip with aggression. I tried pulling myself away from her until she could no longer control me.

I finally was off the hook but totally scared. Rev was then back and we were now the three of us, myself Lucy and her mother. There were only two seats, so Rev was on her feet with an iPad. Things were now a little bit calm and I was at ease though overwhelmed by events. I think they managed to capture my inner person and my spiritual responsiveness as afterwards I no longer treated them with hostility. She then introduced what was typed on the Tablet as a “Report” from the Lord concerning me on her ministry.

I remember her telling me that the Lord had spoken and that I would be appropriated as deacon in the assembly. First I was hesitant but then there appeared to be a spiritual capture, so I sort of nodded as a sign of affirmation. I am woman who puts on long dresses, the first thing I was guided to do was put on relatively shorter dresses, the logic behind that was mysterious but obviously that was a sexual connotation for seduction, which is a pillar for Lucy’s church. FACT.

The lady giving me instructions was a young lady, slightly above her twenties, same thing, seductive looks with extraordinary disagreeable attraction. One thing, never in your walk of faith ignore any red flag, if there are funny theatrics right from the word go, disappear and run for your dear life. I got embraced in the church and that was it. I was a “daughter” in the ministry. Days turned into weeks and months and so on.

My first encounter with the “Liberalism” concept was when Lucy openly tried to fix me in a sexual escapade with a guest Nigerian Evangelist accompanied with one of her aide’s in 2015.

After the usual Oracle services, as a deacon (senior church member) you have the prerogative of having an after service meeting to evaluate a few things as well as take time with a guest in case of any. After that particular service we walked out of Lucy’s Office and went to a private guest lounge, just within Six-eighty. We were 5 of us, Myself, the Nigerian Evangelist, one of her aides, her mom and the brother.

The Nigerian Con (Sexual predator) requested to have me get close to him so that we could have a prayer benediction and then leave as the rest had already left. I obliged because I was in a hurry to leave. Suddenly, From behind, the lady aide softly held my waist, we were a bit close in terms of acquaintanceship so I did not take offence.

However, the moment I was sandwiched between them, I knew this was not a prayer but something else, perhaps a plan to kill me, because the thought of a sexual encounter was far-fetched. How now? I became very aggressive, and threatened to scream if they did not get out of my way.

The moment both of them realized that I was not in the business of entertaining that nonsense, they simultaneously let go their arms and retreated to the seats. I uttered no word and left immediately traumatized. The final part and my redemption journey coming your way.

Petrol price in Nigeria one of the cheapest in Africa –...