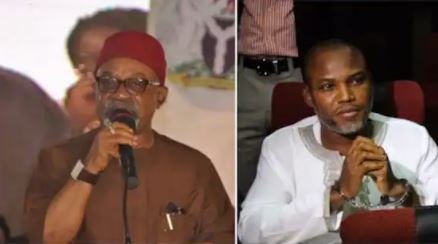 The minister in a statement issued through his media office told IPOB to stop linking him to the re-arrest of their leader, The Nation reported.

The minister described attempts to link him with the arrest of Kanu as deceitful, mischievous, malicious and wicked. The statement read in part:

“Ngige is occupied, involved and engrossed with his duties as the Labour and Employment Minister, member of Federal Cabinet Committee for Economic Recovery and member of the Economic Sustainability Committee constituted by President Muhammadu Buhari, which is headed by Vice President Yemi Osinbajo, with the mandate to tackle the challenges and fallouts of COVID-19 and post COVID-19 era.

“It is therefore unthinkable that somebody with grey matter in his brain, except if he is hallucinating like the IPOB spokesman, could accuse a very busy Minister like Senator Ngige of being part of a ‘conspiracy’ for the arrest of Nnamdi Kanu.”

Ngige explained that he is neither the minister of police affairs, Justice, foreign affairs nor the National Security Adviser, to start discussing issues of extradition or arrest of a fugitive outside Nigeria’s territory, which are outside his mandate.

According to Vanguard, the minister stated that he has decided not to make any statement about the arrest of Nnamdi Kanu because the IPOB leader is already standing trial in a competent court of law for a treasonable felony.

Horror as man is arrested with fresh head of a child...