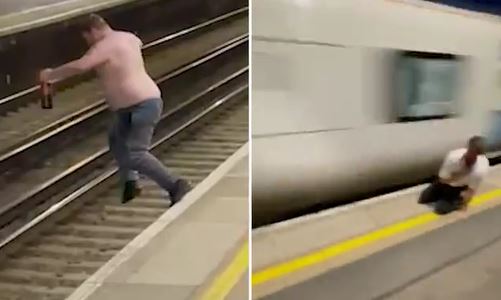 A ‘drunk’ man has been filmed leaping down onto the railway tracks before onlookers desperately tried to save him from an oncoming high-speed train.

Footage of the heart-stopping moment the man jumped down onto the tracks has been shared exclusively with MailOnline.

It shows the man, who could be charged with trespass, staggering along the platform at Belvedere railway station in south-east London at 10.30pm on Wednesday, June 23.

Onlookers claimed the man was screaming racial abuse at teenagers standing on another platform. One of the teenagers allegedly called over to ask him to go to them, and ‘within a split second the man jumped on the tracks’, a witness said.

In the video the man, who appears to be topless and carrying a bottle, leapt down onto the tracks but fell and rolled on the wooden beams.

A collective gasp of shock could be heard echoing around the station platforms surrounding the tracks as an onlooker shouted ‘oh my God get him up’.

As those on the platform realised a train was hurtling towards the man, he appeared to roll into a safe space close to the platform.

Another man put out his hand to try to save him, but had to be pulled back to safety as he risked being hit by the train himself.

‘Everyone somehow walked away unharmed’, according to the person who captured the video.

They asked not to be named, but said: ‘The man was on the platform and he was a bit drunk and I’ve seen him shouting at himself so I thought I’d get my phone out to record him in a drunk state just for my friends.

The filmer said those on the platform had ‘no idea what we’d see’ after the train had passed over the man.

They added: ‘We all looked at each other as if to say who was going to look first. I looked over. I was the first person to look and he was crouched up in a fetal position and he was alive and completely unharmed.

‘I made sure I saw him get out. They turned the electrics off and then he got up and was standing and once I saw he was unharmed I had to leave because of the shock of it. I heard a fire engine come as I left so I think emergency services were called.’

A spokesman for the British Transport Police said: ‘Officers were called to Belvedere station at 10.28pm on 23 July following a report of an injured person on the tracks.

‘Paramedics also attended and a man was taken to hospital for treatment. A criminal investigation into the incident is now underway, and enquiries are ongoing.’