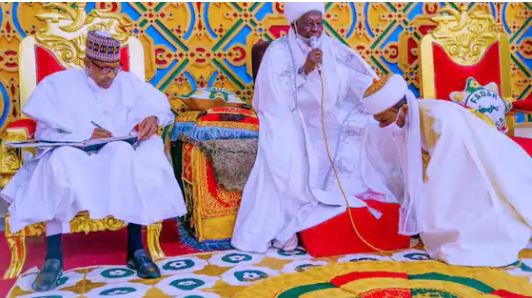 President Muhammadu Buhari said could take a trip to his hometown, Daura, Katsina state, every two weeks if he liked and nobody could stop him. He, however, said there were things to put into consideration such as the high cost that presidential movements accrue and exposing security personnel to the weather, PM News reports.

According to Buhari, he would prefer the money be put to better use like improving schools, clinics and hospitals. The president made the statement on Friday, July 23, when he paid a visit to the Emir of Daura, Dr. Umar Faruk Umar, at his palace.

Expressing regret over his inability to visit his kinsmen often, he gave them assurance that his heart remains with them.

Also speaking, the Emir of Daura expressed his gratitude to President Buhari for always creating time to visit his hometown and the palace despite his tight schedule. According to him, Nigeria is lucky to have someone like Buhari “at this point in time”, Daily Trust reports.

The traditional ruler who believes the president has done well said the visit to Daura was a reflection of his good character. He added that the people were proud of him.