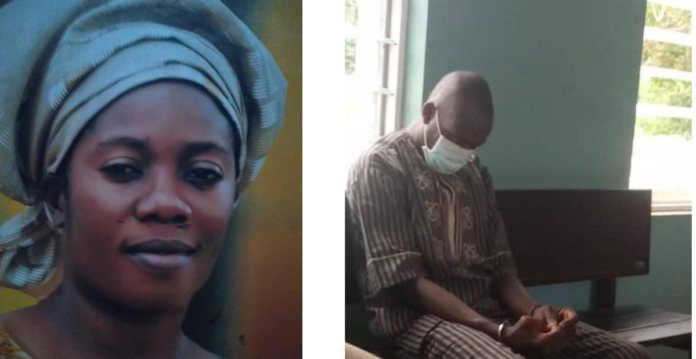 A High Court sitting in Oyo town has sentenced a 37-year-old truck driver, Adeyemi Morenikeji, to death for the murder of Mrs. Racheal Ayanwale, his boss’ wife and a staff of Federal School of Surveying Oyo.

In his confessional statement when paraded at the Oyo State Police Command headquarters, Eleyele Ibadan, on April 11, 2019, Morenikeji, a former employee to the Ayanwale family, had said that he lured the woman out of her office under the pretext of helping her to seek spiritual solution to her marital problem.

He said that he strangled the woman to death on their way to a spiritual house, dumped her body by the river side and went away with her Pontiac Vibe vehicle with registration number KJA 67 CY. He was arrested by men of the Oyo State Police Command on April 18, 2019 at Sango-Ota, Ogun State.

The judgement, in the case of The State vs Aderemi Morenikeji, was pronounced on Friday, July 16, with two-count charge preferred against the accused in a suit with charge number HOY/IC/2020.

The judge also sentenced Morenikeji to 14 years imprisonment with hard labour on a Count Two robbing the deceased of her Pontiac Vibe car with registration number Lagos KJA 67 CY, its particulars, as well as itel and Nokia phones on the day she was murdered.

Delivering the 60-page judgement for almost two hours, Justice Adenike Adeeyo read the offence the accused was said to have committed, and the change he later made in his initial confessional statement to the police during investigation, with the claim that he wrote the statement under duress and with torture.

But the judge said that with his initial statement and those of prosecution witnesses, as well as the result of post mortem by a pathologist, it was evident that the accused committed the act.

Count One of the charge: “That you, Aderemi Morenikeji on or about 21st day of April, 2019 at about 1400hrs, between Schol of Surveying and Awe Road, Oyo in the Oyo Judicial Division murdered one Racheal Oyewumi Ayanwale (female) by strangulation and thereby committed an offence contrary to Section 316 and punishable under Section 319 of the Criminal Code, Cap 38, Vol. II Laws of Oyo State of Nigeria 2000.”

Count Two: “That you, Aderemi Morenikeji on or about the 11th day of April, 2019 at Awe Road, Oyo in the Oyo Judicial Division having strangulated and murdered one Racheal Oyewumi Ayanwale (female) robbed her Vibe Pontiac car with registration number Lagos KJA 67 CY valued at N1,720,000 (One Million, Seven Hundred and Twenty Thousand Naira and thereby committed an offence contrary to Section 401 and punishable under Section 402 of the Criminal Code Cap 38, Vol. II Laws of Oyo State of Nigeria 2000.”

After being asked to make an allocutus (plea), the defendant pleaded for mercy, saying that he had no justification for what he did and had no one that could help him. The defence counsel, B.A. Oyelami, also appealed to the court to temper justice with mercy, as the defendant’s father is aged and he also had many children to take care of. 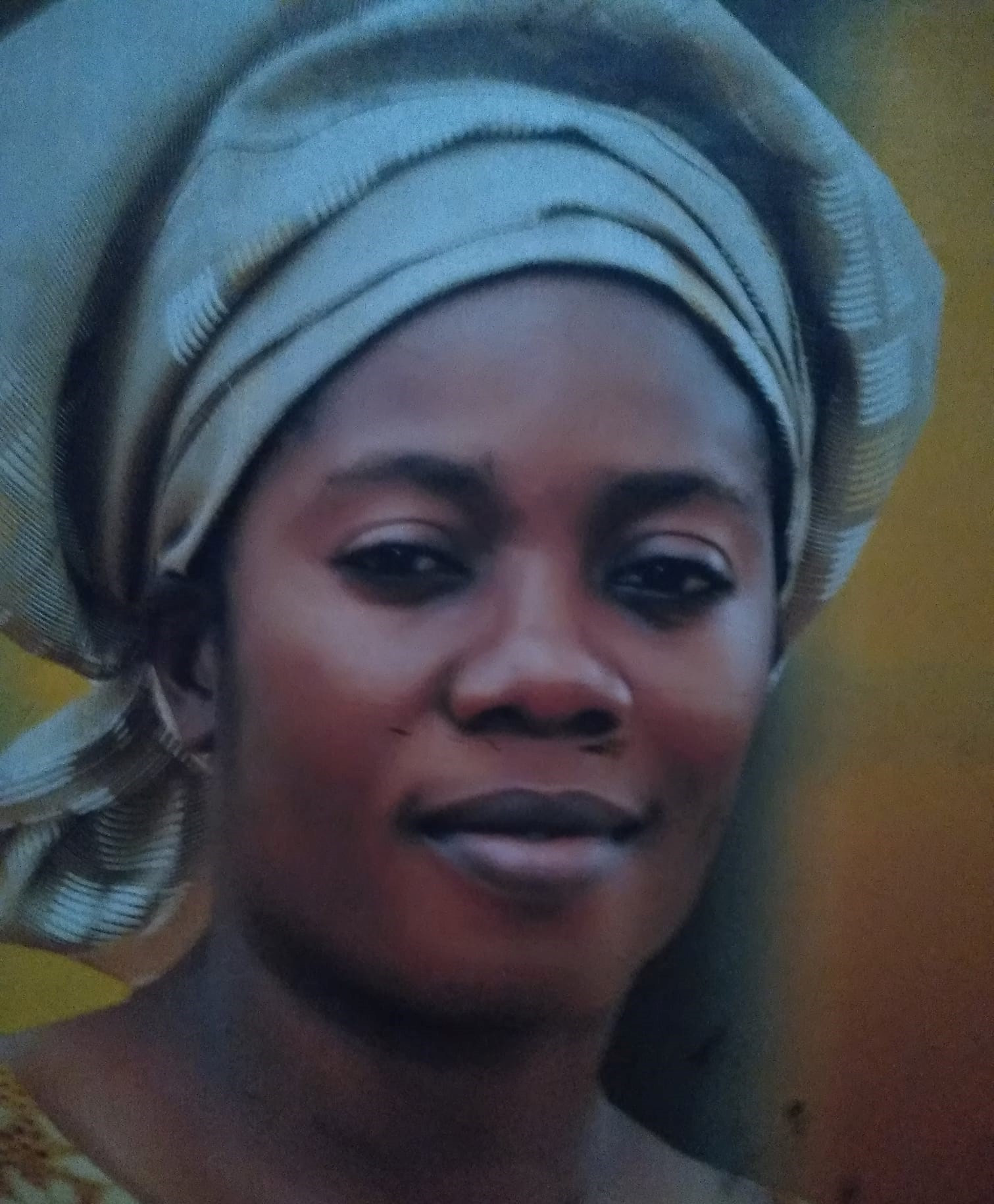 But the prosecution counsel, Kayode Babalola, asked the court to note the demeanour of the defendant from the beginning, to know whether he was sober, with the fact that the court could not go out of the prescribed punishment for someone who committed murder.

After the allocutus, Justice Adeeyo pronounced the judgement thus: “The defendant is guilty on Count Two for robbing Mrs Ayanwale of her Vibe Pontiac car and is hereby sentenced to the maximum of 14 years imprisonment with hard labour.

“In Count One, I considered the allocutus of the defendant and his counsel pleading for mercy. Unfortunately, the court does not have discretion in the sense that if the law says it is death, you cannot reduce it. Consequently, the defendant, Adeyemi Morenikeji, is guilty as charged for murder, and is hereby sentenced to death.”

The judge also ordered that “the Vibe Pontiac car with registration number Lagos KJA 67 CY belonging to late Mrs Racheal Ayanwale be released forthwith to the husband, Mr Sunday Ayanwale with two phones, and the particulars of the vehicle.”

Giving an insight into how the murder was perpetrated, the then state Commissioner of Police, Shina Olukolu, said that Mrs Ayanwale, who was at her workplace at the Federal School of Surveying, Oyo, received a phone call from Morenikeji at about 2:00p.m., on April 11.

The woman was said to have dropped her bag with her colleague and stepped out to meet Morenikeji. That was the last time she was seen alive as the suspect allegedly killed her and her mobile phone lines became unreachable.

After the case was reported at Durbar police station in Oyo town, it was transferred to the Anti-Kidnapping Squad for discreet investigation. A team of detectives, led by the officer-in-charge, CSP Olawale Tiamiyu, started an investigation into the case, which led to the arrest of the suspect at Sango-Ota where he relocated to.

During interrogation, the suspect confessed to killing Mrs Ayanwale, aged 51 years, by strangulating her and escaped with her Pontiac Vibe vehicle.

Morenikeji also claimed he was once working with the deceased’s husband, but was sacked, while his salary for few months were not paid. He said that this made him hatch the evil plan of luring Mrs Ayanwale from her Oyo office to Awe-Oyo road in the guise of taking her for prayers to solve spiritual problems on her marital issues.

During an interview with Saturday Tribune, Morenikeji, claimed he was suffering for lack of parental care by his father after his mother died, adding that he gave in to devil’s lure to kill the deceased because of the bitterness he harboured over his sack.

“I killed Mrs Rachael Ayanwale. She was the wife of my boss who I worked for before they both sacked me. I drove their truck for them, plying Wharf in Lagos and Obajana in Kogi State, but I was sacked at a period when my wife was pregnant, and I couldn’t afford her going for ante-natal care, and when she eventually delivered, we lost the child. All this while, I had been begging them to forgive me, but they refused. Even after the death of the child, I still went back to them with someone to beg them again to re-employ me, but they refused,” he said.

“When commercial vehicles start developing fault frequently, owners should take it easy, as it is not the fault of the driver. My boss’s vehicle was always giving me problems whenever I travelled, and the owners felt I was just cheating them. On several occasions, I would repair it without informing them, but if the problem was a serious one, I would inform them, and they would threaten to sack me.

“So when the vehicle developed fault again, I felt they were just threatening me again, until they said they had sacked me. I kept pleading with them for over four years, sending several people to beg them on my behalf, but they maintained their stand.

“After losing that job, it was difficult getting another one despite trying so hard. I want to say that despite being very fervent in prayers, I am suffering from spiritual problem.

“Later, she kept disturbing me on phone about where I promised to take her for spiritual prayer; that her husband’s new wife was attacking her spiritually, and I told her again that I would take her somewhere soon.

However, during that period, I kept thinking about how much they hurt me by sacking me, and I began planning to take vengeance. I capitalised on that to punish her, so after a while, she called me again, and I promised to come to her office the following day; that I would take her somewhere.

“When I got to her office, I called her on phone that I was outside, and she said she was coming. When she came, I told her that we would need to go in her vehicle as the place was on Awe road that leads to Iwo. She went back to the office to lock her drawer and then brought her car and we set off. So when we set off, we headed towards the Awe/ old Iwo road. After passing a popular farm on the road, the woman said she wanted to defecate, and we stopped and I showed her where she could use.

“All the while, I was thinking about how she and her husband had sacked me, and that the time to harm her had come. At that period, I was engulfed in two thoughts. One was to harm her, while the other was that I should forgive her.

“After defecating, she went to a stream nearby to wash her hands, and I moved towards her and strangled her. She struggled and tried to shout for help, but I held her neck until she died. When she died, I left her body beside the stream and took the car and came to Ibadan. I also took her phones with me.

“When I got to Ibadan, I found a buyer for the car. When the person asked how much I wanted to sell it, I told him N1 million, but he said he didn’t have money immediately. Before then, he said he noticed the car’s papers had a woman’s name, and I told him I would bring the woman whenever he wanted to pay.

“It was after that that I went to Sango Ota because my brother-in-law had called me that he found a truck I could be driving and that I should come the following day. I went to Sango-Ota, and it was there that I was arrested by the police.

“There was nothing between me and the woman while I was working for her husband. In fact, there was a time I went to her in her office, after I had been sacked, telling her that one of my children was sick and that she should loan me N5,000, and she did. She then asked where I wanted to take the child and I told her that I would take her to a healing home with some Osun faithful, and that was when she asked if I had somewhere I could take her too as well for her marital problems.

“After I killed her, I was disturbed by my conscience that I had killed somebody but there was nothing I could do. I was greatly disturbed. I killed her on April 11, and was arrested on April 18. I spent seven years in that employment.

“With what happened, I know the government will kill me, because whoever kills by the sword will also be killed by the sword. My family members have heard about what happened. I plead that her spirit should forgive me, as I know I will also join her.” he said.

However, Morenike recanted in the court, as he said that he went with late Mrs Ayanwale and her husband on the day she was killed. He said that the husband followed his wife when she went to defecate but returned to car alone. He also claimed that the husband used charms on him and gave him the wife’s car to drive away.