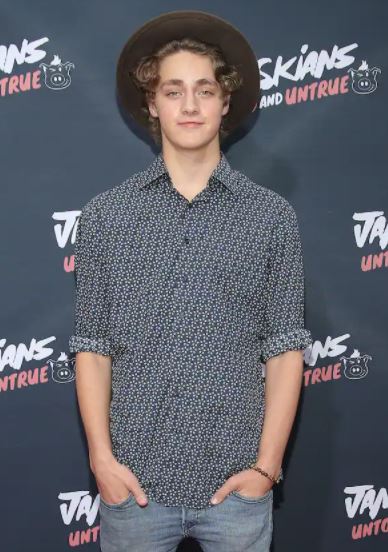 Fin Argus is a Hollywood actor who made it to the limelight over his role in the Disney Plus movie Cloud. At 23 years old, he has a career that spans over a decade.

His real name is Steffan Argus and he was born on the 1st of September in Des Plaines, Illinois, USA to the family of Bob and Dina Argus. He is an American by birth and celebrated his 23rd birthday in 2021.

Fin Argus has two sisters named Sadie and Lacey Argus, and they all grew up together in Illinois. The reports revealed he had an active childhood and has been interested in pursuing a career in entertainment since he was very young.

Fin Argus went to Maine West High School and in order to build on his music skill, he attended Berklee College of Music

Fin Argus started his career at a tender age as he already started performing in Chicago Musical Theatre productions. The Hollywood star was among the five children who represented the Kidz Bop music label as part of the Kidz Bop Music Ensemble between 2011 and 2013.

He was also handed roles in the production of the movies The Little Rascals and Bridge to Terabithia. Apart from movies, he has featured in numerous music videos as well as commercials.

When it comes to musical instruments, Fin Argus is talented; he was trained to play four instruments, and he taught himself five more. Some of the instruments he can play are bass, jazz guitar, guitar, ukulele, piano, among others.

Fin Argus is also a good singer with his debut single titled Make Me Cry. As an actor, Fin has acted in a number of movies, and some of them include; The Gifted, The Commute, Virtual High, Cloud, Perception, among others.

There are no details of Fin Argus being in any relationship; he may, however, be in one which he might be keeping away from the media.

Fin Argus is living a comfortable life in Los Angeles, California, USA, there are no details about his net worth.

Fin did not die. The question of whether he is alive or dead arose from the role he played in the Disney Plus movie Clouds. Clouds is based on the book Fly a Little Higher: How God Answered a Mom’s Small Prayer in a Big Way, authored by Laura Sobiech.