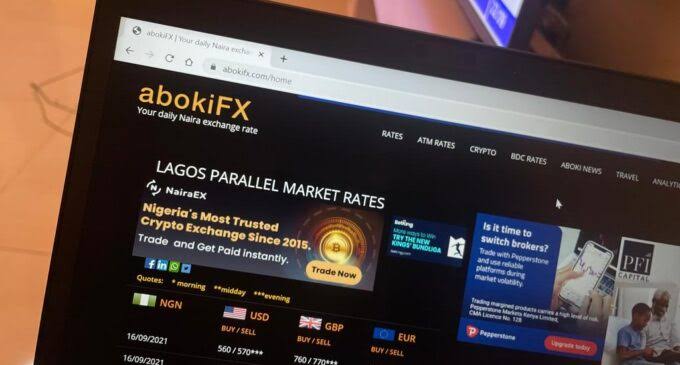 Nigerians have taunted the Central Bank of Nigeria (CBN) for accusing abokiFX as responsible for the sliding of naira against dollar at the parallel market.

abokifx is a web platform that reports movements in the foreign exchange market.

Since the apex bank placed a forex sales ban on Bureaux De Change (BDC) operators, the naira has hit the lowest rates in 48 years — trading above 550/$1.

On Friday, Godwin Emefiele, governor of the Central Bank of Nigeria (CBN), said the apex bank is investigating Oniwinde Adedotun, the founder of abokiFX for engaging in alleged forex data manipulations.

TheCable had earlier reported that Adedotun and abokiFX Limited are currently under the radar of the CBN over “illegal foreign exchange transactions”.

Later in the day, abokiFX distanced itself from the allegations, saying the platform is solely for parallel rate information and not trading.

The management of the platform also shut down the parallel market trading segment.

Twitter users said the CBN’s move would not solve the forex crisis in the country or reverse the slide of the naira.

Some Nigerians have also created a parallel market information website – MeffyFX — to taunt the CBN governor.

It’s mostly likely amplifying their failure and in order to keep their ego, they will place a ban!

With all the ban, USD is raising to 600 Naira under their nose.

When abokiFX was busy updating rates in 2014, it was all fun and APC used it as major campaign. They said Nigerians are not okay with $1/N166 and promised to make it $1/N1. Now that a dollar is N560 instead of solving the actual problem, they are running after imaginary enemy.

Naira is about to go strong. The problem finally fixed. https://t.co/gZmhVJbCoh

Thread – The #Ifekaego FX Tutorial:
The most important determinant of the value of the Naira is whether or not the Nigerian economy is productive and competitive in international trade. That is to say, whether it has a diversified base of complex, value added products it exports

Now that AbokiFx has shutdown updates of rates, how will that help naira rise?

Same thing this govt did with border closure. How did it help food production, particularly rice in Nigeria?

"It was closed to curb insecurity" are we secured 2day?

Wat do these guys smoke in APC?

This thing Meffy is doing is a dangerous game. Soon Nigerians would start ignoring the Naira totally and dominating everyday transactions in USD. This is usually the beginning of disaster for any country’s fiscal trajectory