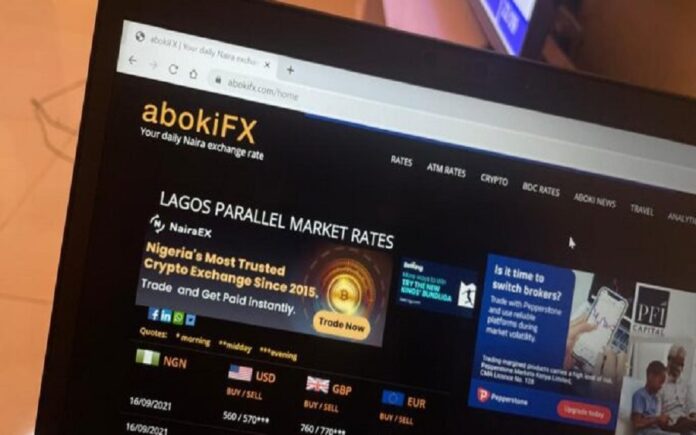 AbokiFX is being investigated for possible sabotage against the Nigerian state.

The apex bank is accusing the owner of the website, one Mr. Olusegun Adedotun Oniwinde of running a scheme tantamount to “economic sabotage” by using his website to set exchange rates. According to the source, Mr Oniwinde might be profiting from the speculative activities of the naira by setting exchange rates while living outside the country.

“Are we all comfortable with one unknown unlicensed man setting exchange rates in Nigeria while he lives in far away England?” the source queried.

They also accuse “unseen actors” of probably gaining from Oniwinde’s daily reports on exchange rates, linking the suspicion to over 20 bank accounts that he operates in Nigeria.

In a set of documents shared with Nairametrics, the owner of the website has a company registered in the United Kingdom with all filings (between 2015 and 2019) showing a shareholder’s funds of 1000 British Pounds all in cash. The company does not have a fixed asset or other current assets except cash.

Sources accuse AbokiFX of maintaining over 20 bank accounts with “millions of naira and thousands of dollars” going through “annually here in Nigeria”. “All the CBN is doing is trying to call people out. It may burn some people, but it is for the good of the entire country,” the source added.

Mr Oniwinde is also being accused of registering a company in the UK as an owner “but also says there are other significant owners he cannot disclose”, according to the source. In a UK Company House document shared with Nairametrics, Mr. Oniwinde, who is listed as a British citizen, owns 75% control of the company. AbokiFX is also registered in Nigeria, according to our findings.

How are black market rates obtained?

Before AbokiFX, black market rates are easily obtained via a simple phone call to black market operators, who confirm the rates. Whilst there can be different rates quoted, the disparity is largely insignificant. Rates can also be different from state to state. However, with Aboki FX, most unofficial forex buyers or sellers, access the website to get a guide of what the rates are.

Nevertheless, most operators inform Nairametrics that they get their rates from the forces of demand and supply and not from the website. Sellers of forex also decide on the final exchange rate after negotiations with their counterparties.

Yet, the CBN appears to be accusing AbokiFX of undertaking a grand scheme of setting an exchange rate that has probably led to the depreciation of the naira from N505/$1 before the ban to over N560/$1 as of September 16, 2021.

“How exactly does he collect his data? Do you know any BDC that supplies daily rates to him? Does he have staff on ground that collects these data?” they quipped, alluding to the growing popularity of AbokiFX in providing a widely accepted platform for gauging the black-market exchange rate which the central bank has often cited as being illegal and not representative of the forex liquidity and true value of the naira.

Despite the characterization of the black market by the apex bank, in 2016 when the black market rate fell to above N500/$1. The CBN Governor claimed victory when the rates unified with the official rates, strengthening to around N366/$1 as dollar liquidity hit the market with the advent of the Investor and Exporter window. The current disparity, which is now above N140 and rising, is mostly attributed to the stable nature of the NAFEX, which is yet to depreciate despite dollar scarcity reported by businesses who require it for official transactions.

The investigation of AbokiFX underscores the pressure faced by the central bank to fight off speculators who they have accused of sabotaging the exchange rate. Publishing exchange rates, especially black-market rates predate the current forex crisis and has been a regular in newspapers since the advent of democracy.

Thus, most analysts who spoke to Nairametrics on the condition of anonymity are worried about the direction of the central bank. Many believe censorship of AbokiFX or any website reporting black market forex rates will be seen as impinging against the right of freedom of the press or opinion. It is also not clear what AbokiFX may have done wrong to suggest that they are sabotaging the economy, one lawyer explains to Nairametrics.

Nigeria’s central bank has deployed several measures aimed at maintaining a stable exchange rate such as allowing foreign remittances to be paid in dollars, limiting forex deposits and withdrawals over the counter, introducing stringent documentation for forex utilization and most recently banning the sale of forex to BDC. None of these measures seem to have worked.

How Food Seller Was Found Dead In Her Shop With Festish...