Veteran Nollywood actor Clem Ohameze has sought prayers from his fans and loved ones as he’s set to go under surgery due to the effects of a car accident he had some time ago.

According to him, they need to cut open his neck and make some separation in his bones to enhance his movements as it seems he has been affected over there because of the car accident he had some time ago.

Clem Ohameze then added that he was scared when he was told about the procedure in which the surgery is going to take place and asked the doctors to let him think about it and now is set to go under the surgery hence seeks prayers from us all.

From his explanation, he seems to be going through a lot and the surgery also looks scary but he has to do it and we hope and pray he comes out of it successfully to be able to move around once again just as he used to.

It appears most of the veteran actors end up being sick for a very long time or be going through some kind of hardship one way or the other and some eventually die in that state which is very bad therefore we pray everything gets well for Clem Ohameze. 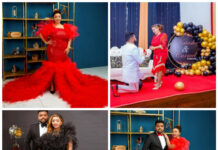