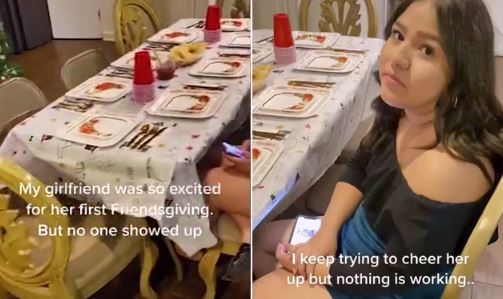 A woman was left practically in tears after she spent weeks planning a massive ‘Friendsgiving’ dinner for a bunch of her pals – and not one of them showed up.

Christian Zamora, who goes by the username @Kidalloy on TikTok, explained in a now-viral video that his girlfriend, Maryann, spent hours preparing for the feast.

She planned the event two weeks in advanced, decorated her entire basement and cooked a huge dinner for herself and her friends, but unfortunately, they all stood her up and nobody came. 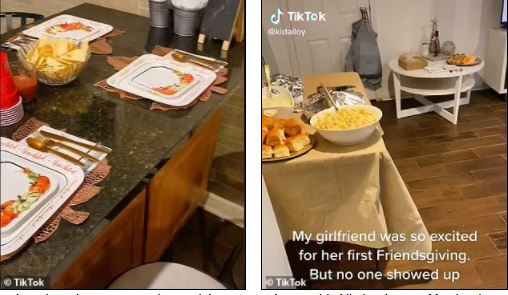 According to Christian, they didn’t even send her a message to let her know that they weren’t going to make it.

‘They were planning everything, everything was all set – the date, the time, and everything. They were all gonna come.

‘But the day came and no one was answering the group chat. No one was texting or calling, but in her mind, she thought everyone was running late. When it hit the three hour mark, she was like, “Yeah no one’s gonna come.”‘

Thankfully, her boyfriend swooped in and saved the day by inviting his own friends to fill their spots. 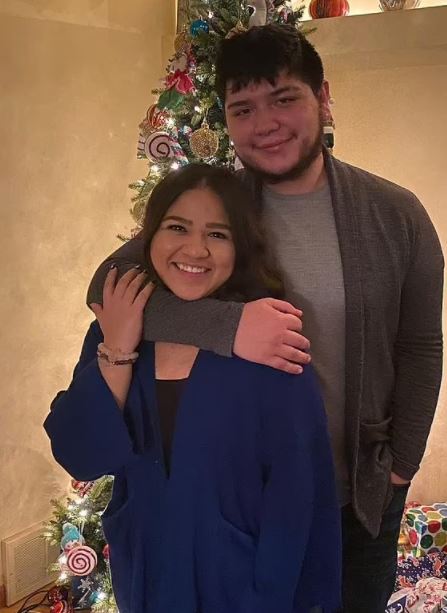 ‘She called me and told me what happened so I started heading over to her house. On the way there, I called my friends. I told my friends, “Hey, are you [open to] coming to my girls Thanksgiving?”‘ he said.

‘They were more than gracious enough to come. They all came and brought stuff. It’s like she had her own Friendsgiving, there was a happy ending to it.

‘She wasn’t upset, she wasn’t mad, she was kind of disappointed about her actual friends not showing up but other than that, she still had great company and she still had a great time.’

Maryann added that she was no longer friends with the people who skipped her dinner.

Whoever Emerges PDP Candidate Will be Next President – Goodluck Jonathan.