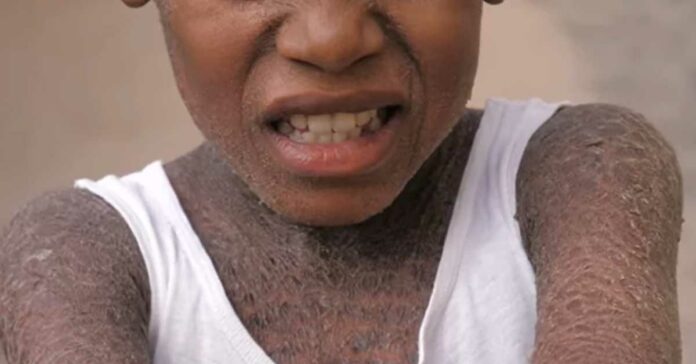 An 11-year-old boy’s dream of becoming a pilot is shaky as going through school for knowledge acquisition has become an unbearable experience due to the mockery his school mates subject him to.

The little boy identified as Kami Mugisha Aftan always feels uncomfortable because his rare skin condition makes his schoolmates bully and refer to him as a crocodile.

Wikipedia reveals that the condition mentioned above is an extremely rare autosomal recessive hereditary skin disorder associated with a high risk of skin cancer. It is characterized by abnormal susceptibility to human papillomaviruses (HPVs) of the skin.

The resulting uncontrolled HPV infections result in the growth of scaly macules and papules resembling tree bark. Mugisha’s condition makes sleeping at night difficult and even gets worse when the skin is exposed to sunshine. He keeps scratching the skin due to a combination of itching and pain.

He is bullied at school and schoolmates run away when they see him, saying he is an animal causing him to always isolates himself to cry when he is bullied and made to feel unwelcomed by his schoolmates and other children.

The little boy’s aspiration to become a pilot in the near future seems impossible as he gets uncomfortable in the midst of his peers In an interview with Afrimax English, Mugisha’s mother, Scovia disclosed that several schools have rejected her son because the authorities thought his condition might be contagious.

Check out the video below: