Pero Adeniyi, the babymama of Nigerian legendary singer 2face Idibia has said she owes nobody explanation on whether she has moved on with her life or is still in a romantic relationship with her children’s father.

Pero Adeniyi stated this during an Instagram live session with her fans and followers while on a breakfast date with her boyfriend, who she refused to show his face.

While helping herself to a plate of salad and sipping a drink, Pero noted that people have frequently asked her to show her boyfriend to prove that she has moved on from 2face.

Reacting to this noted that she owes no one any explanation and doesn’t need to prove to people that she has moved on and would not reveal her boyfriend’s face.

In the lawsuit notice dated November 10, Pero’s lawyers referenced Annie’s Instagram outburst and the audiotape which went viral weeks ago in which she alleged that her husband, 2Baba “packed his bags and came to America to see her (Pero) and his other kids”.

Her lawyers stated that these allegations are “blatantly false, misrepresents facts and portrayed Pero as an individual with loose morals”. Annie was further accused of engaging in “malicious and libellous online publication” which subjected Pero and her kids to online harassment and bullying.

Reacting to this, self acclaimed international investigative journalist, Kemi Olunloyo took to her Instagram page to slam Pero Adeniyi, warning her that Annie Idibia owes her no penny not to mention N500m.

She wrote: “ADVICE FOR PERO: Annie does not owe you a penny let alone N500M for defamation and libel. Annie has apologized because she did so under pressure. I questioned that before this post. Now you’re serving her court papers on her birthday. How heartless and tasteless. As the longtime President of BMAN (Baby Mama Association of Nigeria) you have totally disgraced us We do NOT get involved in our baby daddy’s marital section.

All we want is our child support and bonding for the kids especially from the deadbeats. You have chosen clout to remain in the news. Leave Annie alone to enjoy her marriage, respect yourself and your kids for Tuface. Their school staff and classmates are laughing behind them not to mention your neighbors and the whole internet. Baby mamas must put the kids first. Tuface ain’t gonna marry you. Accept that he chose Annie. 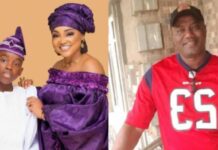