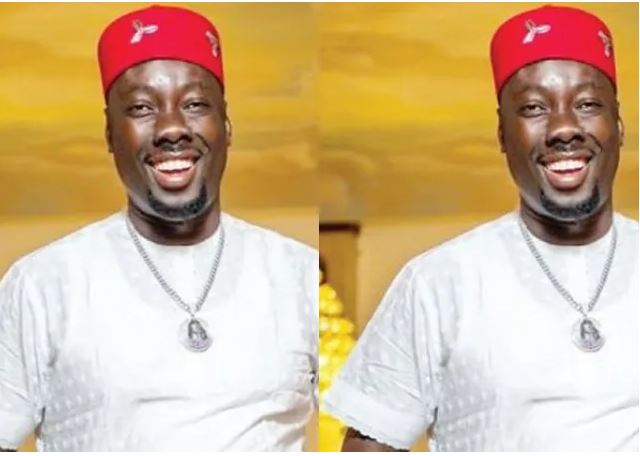 Obinna Iyiegbu popularly known as Obi Cubana is a Nigerian Based businessman, entertainer, entrepreneur, philanthropist, and a show killer, he is the chairman and the owner of the popular Cabana groups. Obinna Iyiegbu best known as OBI CUBANA is from Oba, a community in Demili-South Local Government Area in Anambra State, Nigeria.

His mother’s burial which took place on the 16th of July, 2021, will be the point of discussion for a long time, not just in Aba or Anambra but also in Nigeria.

This is owing to the lavish spending which took place during the party. Obi Cubana received over 200 cows aside from other cash gifts worth millions for his mother’s burial.

The event brought the village of Oba to the limelight.

Cubana lost his mother in 2020, to keep her in his memory, he got her immortalized with a pendant and neckpiece worth $100,000.

While the burial is being rated as one of the most lavish in the country, there are some disagreements in some quarters as some said the burial ceremony of famous billionaire Mike Adenuga’s mother in 2005 was greater.

See some of the clip from the burial below:

Popular socialite and businessman, Obinna Iyiegbu, aka Obi Cubana, has been arrested by the Economic and Financial Crimes Commission for money laundering.

The Anambra-born club owner,  who arrived the headquarters of the EFCC at Jabi, Abuja, at about noon on Monday, is currently being interrogated by operatives of the commission.

Though allegations against the socialite were sketchy as of press time, a source disclosed that his case borders on alleged money laundering and tax fraud.

The source said, “Obi Cubana was arrested and brought to the EFCC headquarters on Monday afternoon over allegations of money laundering and tax fraud. He is being grilled by detectives as we speak.”

his net worth is estimated to be $96 million