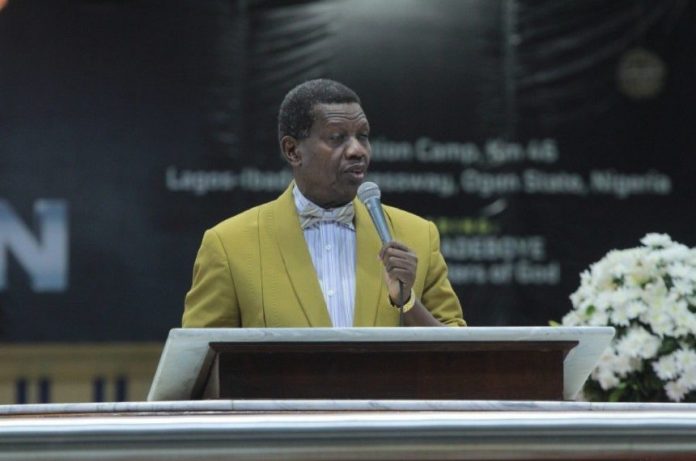 General Overseer of the Redeemed Christian Church of God (RCCG), Pastor Enoch Adeboye, has once again relayed the tale of his humble beginnings from rural Nigeria, and how a voice called him into church leadership from the surrounding bushes.

TheCable reports that Adeboye made the disclosure during a visitation service at the RCCG Victory House in London.

“I have always loved the bush because I was born in the bush; I went to school in the bush. Even when I was going to the university, it was in the bush because except for the University of Nigeria Nsukka, not many people knew of a place called Nsukka back then,” he was quoted as saying.

The 79-year-old adds that “when I left the university, I went to teach in a bush (a village in Ondo State); and years later in Lagos, I lived in a little house surrounded by bush.”

Adeboye says one day, in the bush around his house, a voice ushered itself into his space and told him he would have to assume the position of a global preacher.

“I heard a voice speaking to me and the Spirit of God made it so wonderfully different that I didn’t even ask who was speaking. “My Father-in-the-Lord had traveled, and before he did, a service to send him off was held, at which we sang a song, ‘We will meet again’. “That voice said that your father has travelled to Jerusalem, and you sang that you will see him again.”

“It continued: “What if he doesn’t come back?

“Ha, of course, he will come back!” I said hurriedly.

“‘Well, suppose he doesn’t come back; who will succeed him?’

“I said that there are some big pastors in the church, the people who had been with him since the beginning of the church. I even mentioned names. “Any name I mentioned, the voice ruled out with reasons — some of them secrets never heard of.

“And after I had presented all the pastors I felt could take over the leadership of the church, the voice asked a scary question, ‘What about you?’

“I wasn’t even a pastor then – Just a worker.

“But the voice returned, ‘That was how David was picked in the bush. At that point, I suddenly realised that the conversation was taking a dangerous turn, so I said: ‘What is my concern? It was then that I became conscious of the fact that I was alone in the bush. Days later, My-father-in-the-Lord returned safely, and I was glad that the voice was wrong. But not long after his return, he came to where I was, pointed at me and said he wanted to see me in his office. When I went to see him, he said: ‘I will be ordaining you in two weeks’ time. Then, suddenly, I remembered that I said I wasn’t even a pastor and then I knew that I was in trouble. My wife and I fasted for two weeks for God to change His mind about what was unfolding, but He didn’t. My day came, and it didn’t matter that I was in the bush. God located me.”

Adeboye’s RCCG can be found in every nook and cranny of Nigeria and across the world.

Rape Allegation; Police Confirm They Will Question Ronaldo After Case Was...