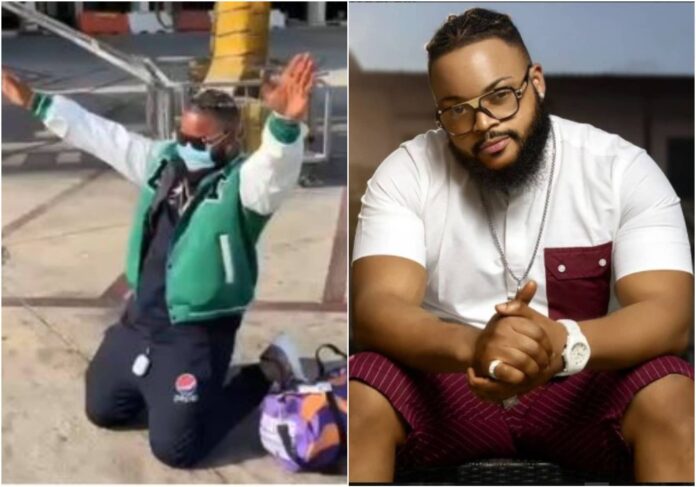 Winner of the Big Brother Naija ‘Shine Ya Eye’ Edition Hazel Oyeze Onoduenyi, better known as Whitemoney, has expressed appreciation to God after leaving the shore of Nigeria for the first time.

The ‘Shine Ya Eye’ Housemates recently embarked on the Pepsi vacation trip to Dubai, courtesy of some of the tasks won during the reality show.

In a video that surfaced online, Whitemoney quickly went down on his knees after they landed from the flight in Dubai with his hands lifted in appreciation to God.

Reacting to this, social media users praised Whitemoney for always being grateful for everything adding that he’s one of the humble people in the ‘Shine Ya Eye’ edition.

Similarly, an Instagram user also said that Whitemoney also acted the same way after stepping his foot in the Biggie house.

terociti wrote: This was exactly disame tin he did as he stepped foot inside the BBN house, he went down on his knees and thanked God. His grateful and appreciative attitude will take him far in life!

iamofficiallexis wrote: I like WM he is humble that’s why God is taking him places

Whitemoney bagged a chieftaincy title and made an ambassador with the Enugu State Government at his homecoming.

Taking to his Instagram page, Whitemoney shared a photo of himself adorned in the popular Igbo traditional attire ‘Isi Agu’ and the hand fan ‘Akupe’ with the inscription of his new title.