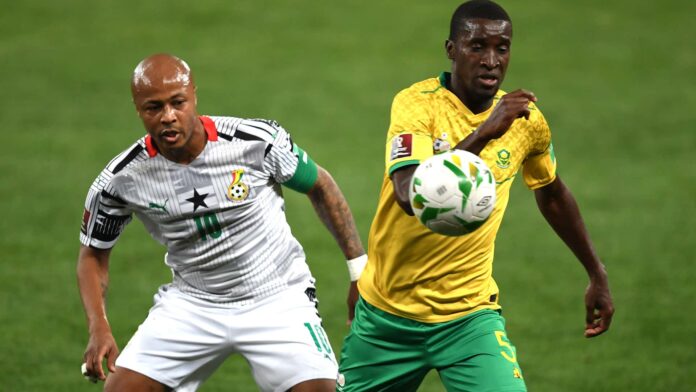 The South African Football Association are set to launch a “formal complaint” after missing out on World Cup qualification following a 1-0 defeat by Ghana.

South Africa needed just a draw to reach the African World Cup play-offs – the final round before the finals in Qatar. But their defeat on Sunday November 14, saw them leapfrogged by Ghana on goals scored as a controversial penalty decided the game.

However, in the aftermath of the match, the South Africa Football Association’s chief executive Tebogo Motlanthe revealed they would be appealing the “questionable decisions”.

He said: “The match officials have decided the game, which is not what is supposed to happen.

“We will be writing to both Caf [the Confederation of African Football] and [world governing body] Fifa – firstly to investigate how the game was handled and secondly to challenge some of these decisions.

“We have already registered with the match commissioner that we will be making a formal complaint.”

The crucial spot-kick was awarded after Leicester City midfielder Daniel Amartey was adjudged to have been fouled by South Africa defender Rushine de Reuck.

Motlanthe went on to add: “We are very disheartened by their actions and we can’t let it destroy the players – when we have the chance to challenge, we will challenge.

“We feel very much robbed because it is not an isolated incident of a penalty. There are just a lot of questionable decisions by match officials and we will get an expert to dissect other incidents, so we can make a strong case.”

Three years ago, South Africa were forced to replay a World Cup qualifier against Senegal after the referee was found to have been involved in match manipulation.