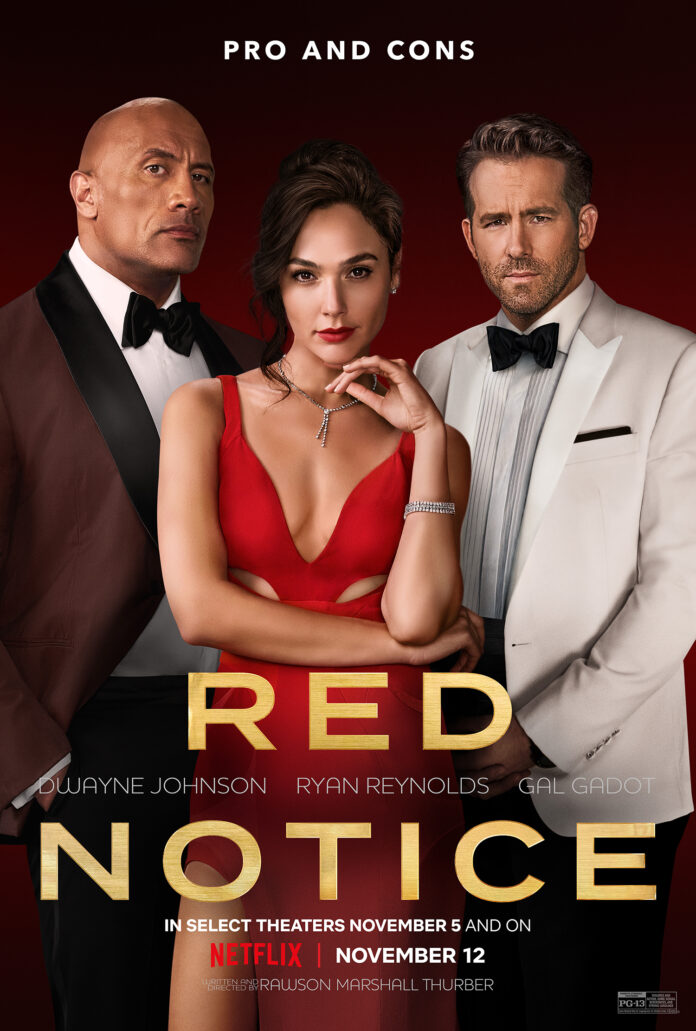 “Red Notice” is a Netflix original film starring not just one, but three of Hollywood’s most recognizable and charismatic stars. Indeed, one could be forgiven for thinking “Red Notice” already has plenty of star power in it between just two of its stars: “Deadpool” actor Ryan Reynolds and “Wonder Woman” star Gal Gadot.

But none other than “Fast and the Furious” star Dwayne “The Rock” Johnson (who is pretty much a superhero in his own right at this point, even without his upcoming role in “Black Adam”) rounds out the film’s central trio — making “Red Notice” one of Netflix’s most star-studded original films to date (and also one of its most expensive).

The former WWE champion gets top billing in the action-comedy film, which sees his character tasked with working together with one of the most notorious art thieves in the world, Nolan Booth (Reynolds), in order to prevent the theft of three major historical artifacts by The Bishop, another art thief played by Gadot. However, a series of twists and turns ultimately reveal that not all things are as they seem in “Red Notice” and, of course, that no one who operates within the world of art thievery is truly trustworthy.

At the beginning of “Red Notice,” Special Agent John Hartley (Dwayne Johnson) is introduced as an FBI profiler chasing after the infamous art thief, Nolan Booth (Ryan Reynolds). After hunting down Booth in Bali, Hartley feigns shock when he finds his life completely turned upside down by The Bishop (Gal Gadot). Framed for the theft of Cleopatra’s first egg, Hartley is imprisoned in Russia where he shares a cell with Booth. In prison, Hartley and Booth bond over the shared trauma from their poor relationships with their fathers. Booth, for instance, became a crook because his father was a Swiss police captain, while Hartley claims to have become a cop because his father was a crook.

Hartley is subsequently forced to team up with Booth, supposedly in order to restore the former FBI agent’s good name. Their shared adventure first begins with a daring escape from prison but eventually leads them all the way from Rome to South America. While the two repeatedly tell each other how much they hate one another, it becomes very clear that the experience has produced a genuine friendship between them.

Eventually, however, the entire ordeal is revealed to be a ruse designed by Hartley and The Bishop, who are actually lovers. While the final twist of the film might come as a surprise to some viewers, small hints at Hartley’s deception are scattered throughout the film — from his unnecessary, flirtatious dance with The Bishop to his sudden ability to escape from previously unbreakable handcuffs.

Nolan Booth first appears in “Red Notice” as the world’s second (or perhaps, third?) most infamous art thief. With his eyes on a multi-million dollar prize, Booth makes a mad dash for Cleopatra’s first egg at a museum in Rome, where he first encounters John Hartley. After eluding Hartley, Booth travels to Bali in order to regroup for his attempt at stealing the second and third eggs, but is quickly ambushed at his home. Eventually, he and Hartley are forced to team up in order to escape prison and stop The Bishop from getting her hands on all three eggs.

During their adventure, Booth reveals that his father was obsessed with locating the hidden treasure of Hitler’s secret arts and antiquities dealer. Unfortunately, for some unknown reason, Booth’s father came to believe that his son was responsible for the temporary loss of a prized Nazi watch. As a result, his father did not speak to him for more than a year, and their strained relationship led to Booth embracing a lonely life of crime.

However, throughout the film, Booth and Hartley become close friends. After the two escape the reach of the police in South America, Booth is actually willing to sacrifice the third egg in order to save his new friend. After Hartley and The Bishop’s betrayal is revealed though, Booth quickly sells them out to Interpol, happily declaring, “Everyone loses, no one gets the money, and we can all be friends again.”

Booth then takes his new best friends on a mission to the Louvre in Paris, which he promises will offer “double the payout” and “triple the challenge.” Honestly, it all seems like a lot to take on for someone who just wants to make a few friends.

While Nolan Booth and John Hartley both end up being decidedly different people than they initially seem to be, Gal Gadot’s The Bishop is pretty much exactly the character she says that she is at the beginning of “Red Notice.” She loves to steal from people and takes joy in beating Booth at every turn. While the film doesn’t explore The Bishop’s origins nearly as much as it does Booth’s and Hartley’s, she does share a few, important pieces of information that make it clear why she turned to a life of crime.

In the middle of the film, The Bishop holds an intelligence analyst hostage and treats him as a largely unwilling therapist. During their “session,” she explains that she also faced a tough childhood and that her father made her who she is today. She further questions whether her inability to accept second place is what keeps her from being truly happy, and admits that she struggles to trust people.

However, the events of the film seem to lead to her discovering a newfound faith in her fellow human beings. When presented with the opportunity to form a three-person team with her lover/art-thieving partner, John Hartley, and her former rival, Nolan Booth, she is the first to accept. In fact, while Hartley is initially reluctant to form a new team, it’s Gadot’s Bishop who persuades him into agreeing

Interpol Inspector Urvashi Das (Ritu Arya), who is perhaps the only truly honorable character in “Red Notice,” spends the entirety of the film just trying to keep up. She quickly deduces that Special Agent John Hartley is not who he claims to be and chases the film’s art-thieving trio all over the world. After The Bishop and Hartley reveal the location of all three of Cleopatra’s eggs, Das leads a team of police to recover them, crashing the wedding of an Egyptian billionaire’s daughter and arresting performer Ed Sheeran in the process. While Das is ultimately unable to keep The Bishop, Hartley, or Nolan Booth in prison for a substantial period of time, one has to hope that putting Ed Sheeran behind bars serves as some sort of consolation prize, right?

Das is last seen in “Red Notice” sending out three of the film’s eponymous memos in the hopes of catching the infamous art thieves at the center of the movie. According to Interpol’s website, a “red notice” is “a request to law enforcement worldwide to locate and provisionally arrest a person pending extradition, surrender, or similar legal action.” Such documents normally contain information about how to identify a suspect as well as details on the crime(s) for which they are wanted.

What happens to Cleopatra’s eggs?

Cleopatra’s eggs serve as the MacGuffin of “Red Notice.” In fact, in a very meta joke, Ryan Reynolds’ Nolan Booth even asks aloud at one point if the third egg might be in a box literally labeled “MacGuffin.”

The hunt for Cleopatra’s eggs is put into motion at the beginning of the film after an Egyptian billionaire offers a multi-million dollar prize in exchange for having them delivered to the wedding of his daughter, also named Cleopatra. Consequently, the eggs begin a journey that takes them all across the globe. The first place they end up is in a museum in Rome, the second is in a private estate, and the third is in a long-forgotten South American bunker filled with Nazi memorabilia. While it’s not explicitly said what happens to the eggs after Interpol Inspector Urvashi Das (Ritu Arya) recovers them in Egypt, it’s safe to assume that they found their way to a museum of some kind. Hopefully, it’s a location where they’ll be better protected than they were in their prior homes.

While the eggs certainly sound and look legitimate, in all actuality, they are completely fictional and fake. In an interview with The Wrap, “Red Notice” producer Hiram Garcia even recounted his amusement at director Rawson Marshall Thurber’s ability to fool people with such a believable fictional history for the objects.

“At the end of the pitch the same thing always came up which was, ‘I had no idea about the whole Cleopatra thing,’ and with great comedic timing he always said, ‘Oh I just made all that up,'” Garcia revealed. “It has such a well-conceived backstory that you wish they were real, but no they were totally made up. It’s a very fun idea he had come up with.”

Taking that into account, one can only imagine what other fictional treasures might exist in the world of “Red Notice.”