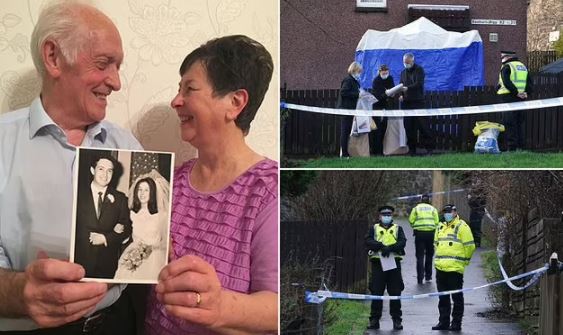 An elderly couple were found dead in their home on Boxing Day, with a 19-year-old due to appear in court tomorrow in connection with the tragedy.

Denis and Mary Fell, 73, were described as a ‘very caring couple’ by neighbours.

Cops described the deaths as a ‘contained incident’.

Police Scotland said they received a report of a sudden death at a home at Raeburn Rigg, Livingston, West Lothian, late on Sunday.

A 19-year-old man has been arrested and charged, and will appear at at Livingston Sheriff Court tomorrow. Police have not released his name or the charge.

Officers were made aware of the deaths around 11.40pm on Boxing Day.

Shocked neighbours said Mrs Fell was a wheelchair user and had a dedicated disabled parking spot outside their property.

A neighbour described Mr and Mrs Fell as a ‘very caring couple’.