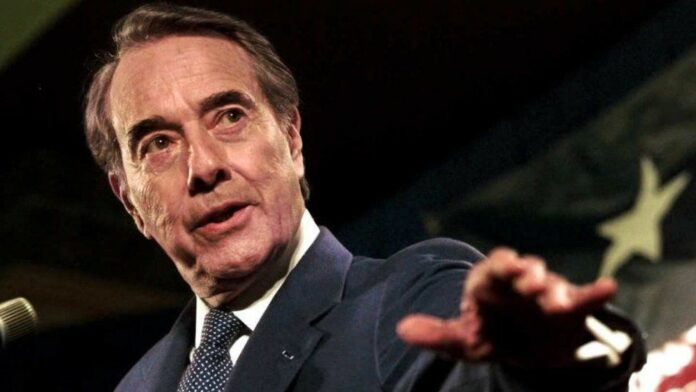 Bob Dole, a Republican Party stalwart and presidential hopeful who espoused a brand of plain-spoken conservativism as one of Washington’s most recognizable political figures throughout the latter half of the 20th century, died Sunday.

“Senator Robert Joseph Dole died early this morning in his sleep. At his death, at age 98, he had served the United States of America faithfully for 79 years,” according to a statement from his family.
He had announced in February that he was being treated for advanced lung cancer. President Joe Biden visited Dole shortly after learning of the diagnosis.
Biden on Sunday released a statement mourning Dole.
“Bob was an American statesman like few in our history. A war hero and among the greatest of the Greatest Generation. And to me, he was also a friend whom I could look to for trusted guidance, or a humorous line at just the right moment to settle frayed nerves,” Biden said. “I will miss my friend. But I am grateful for the times we shared, and for the friendship Jill and I and our family have built with Liddy and the entire Dole family.”
Dole, who was seriously wounded during World War II, had suffered a series of health ailments in previous years. In 1991, he received surgery for prostate cancer, received abdominal aortic aneurysm surgery in 2001, was hospitalized in 2005 after a fall in his home and was treated for a leg infection in 2009.
Dole is survived by his wife, former Sen. Elizabeth Dole of North Carolina, and daughter Robin Dole.
27
SHARES
ShareTweet