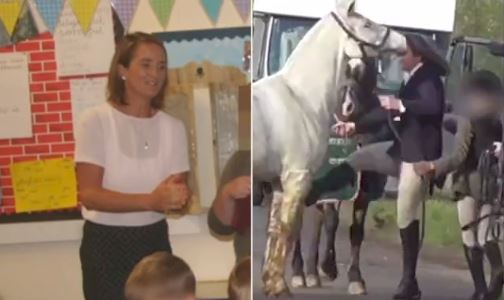 Disgraced huntswoman Sarah Moulds, who was filmed kicking and slapping her horse during a hunt is FIRED from her job as a primary school teacher

A shamed primary school teacher filmed kicking and slapping a horse during a hunt has been sacked.

Sarah Moulds, who was condemned by the RSPCA for alleged animal cruelty after shocking footage of her emerged, has now lost her job at Somerby School after she was suspended last month.

The disgraced rider and mother-of-two from Somerby, near Melton Mowbray, Leicestershire, learned her fate today following a six-week investigation by education chiefs.

Mowbray Education Trust Chief Operating Officer Paul Maddox said in a statement : ‘I can confirm that Sarah Moulds’ employment with the Trust has been terminated.

‘As a Trust we are committed to ensuring the best standard of education for all of our young people and we look forward to continuing this throughout the 2021/22 academic year and beyond.’

Mrs Moulds was a senior leader and class three team teacher at her local Somerby School and was also a director of the Knossington and Somerby Pre-School before her termination.

The 37-year-old was seen lashing out at the horse following a Cottesmore Hunt meet in the county earlier this year.

The Pony Club, which claims to be the world’s largest equestrian youth organisation with more than 30,000 UK members, also axed her as a team manager while condemning her actions as ‘unacceptable’.

In the aftermath of the video going viral, Mrs Moulds received abuse and death threats and moved to a secret location away from her semi-detached £350,000 property for several days.