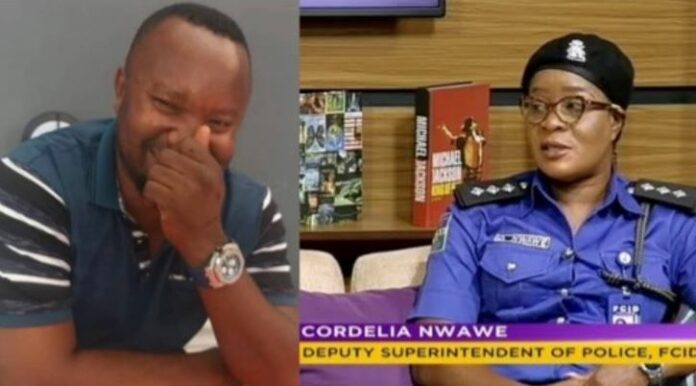 SaharaReporters had reported that Peter and Dayo, both realtors, were stopped on July 14, 2021 while driving along the Ikoyi/Ajah Expressway by a team of police officers in mufti led by Austin, who adopted a fictitious name “Osas”.

The duo said they were treated like criminals while Nwawe, a former Public Relations Officer of the Sokoto and Akwa-Ibom states police commands respectively asked the officers to kill them if they cannot pay N20million as bail.

How Nigerian Policemen Extorted N22million Worth Of Bitcoin From Young Men At Gunpoint In Lagos | Sahara Reporters https://t.co/Dlawmk0CQn pic.twitter.com/J2wNVtFOOR

“Since we have nothing to hide, we gave them our phones and they found nothing incriminating. To our surprise, they ordered us to drive down to their office, we insisted we must know our offences before we can move down to the station. But the police officers descended on us and beat us for disobedience. They claimed we were too fresh not to be a fraudster. We begged them and showed them that we are realtors. We gave them our identity cards and showed them some of our ongoing projects but they insisted we were fraudsters.

“When we got to the police station at FCID Annex, Alagbon Close, Lagos, we were quickly pushed into the cell and they went away with our mobile phones. The police officers returned some hours later and told us we were trading in Bitcoins.

“Before we know it, they started beating us and calling us Yahoo boys, we told them we were not Yahoo boys. We explained that we are realtors and it was because of the decline in naira that we converted our money into bitcoin, but they kept beating us and they said we should write statement around 8:00pm in the night,” he added.

The duo added that the statements written by them were torn into pieces by the policemen while they were forced to sign another ones written by the officers alleging that they were Internet fraudsters.

“We wrote the statements and they tore it into pieces and wrote another statement for us and forced us to sign it. We did signed the statement and they took them before their boss, DSP Cordelia Nwawe with force number 145341, Admin section, FCID Annex, Alagbon Lagos,” they added.

“Officer Austin who led the team also adopted a fictitious name so that people will not know his true name. He was addressed as Osas by DSP Uwawe, he was the one who took us to the cell and threatened to kill the two of us if we cannot transfer the N20million in bitcoin to them.

“So when he bought out his gun and was taking us out of the cell to kill us as ordered by her boss, DSP Uwanue, we now succumbed to him and said he should remove the money from our account, he insisted he wanted bitcoin and not naira, he provided another bitcoin account and he transferred N22million equivalent of bitcoin from our account.”

They urged human rights activists and the government to intervene on their behalf.

Speaking on the incident, a human rights lawyer, Adegbola Odunyemi asked the Inspector-General of Police to investigate the matter.

“I hereby call on well meaning Nigerians to prevail on the office of the Inspector-General of Police; Minister of Police Affairs; Chairman, Police Service Commission; Speaker, House of Representatives; the Senate President and His Excellency, President Muhammadu Buhari, to help us recover this money from these criminal elements parading themselves as police officers.

“My clients are realtors and it was because of the decline in naira that made them to convert their money into bitcoin, they are not Yahoo boys.”

This Photo Has Got People Talking