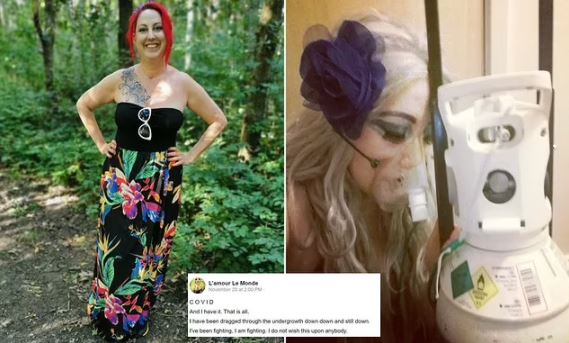 ‘I’m frightened, but hope I wake up’ – Heartbreaking last words of woman before she died from Covid

A woman, who ‘knew she would die’ if she caught Covid, created a list of people to say goodbye to before being placed on a ventilator.

Justine Laymond, 48, contracted Coronavirus in November and tragically passed away earlier this month, 15 years after surviving a double lung transplant, writing in her final Facebook post: ‘I’ve been rushed to hospital in the early hours, oxygen was 30. I’m on CPAP machine and fighting, but admittedly I’m frightened.’

The artist, from Essex, spoke to The Mirror last year, and revealed that she had a ‘hospital bag packed and list of phone calls to make’ should she become infected – and admitted that she was ‘so frightened’ but would ‘fight for her life’.

In 2006 Justine narrowly avoided death after her lungs failed, and was put in a three-week coma, spending weeks on life support and enduring 15 lung collapses before a lung transplant saved her life.

Justine went on to compete in Transplant Games, became a hit drag artist and made sure to live life to the fullest – before the pandemic hit.

Speaking in an interview last year, Justine said: ‘I’m so frightened. I know if I do get it, I will die. I would fight for my life if I did get it, but I know it will kill me.’

‘I’ve got my wishes written out. If we have to call an ambulance, I’ve got a list of people to call to say goodbye to. I’ve got an emergency bag packed.’

Justine and her boyfriend Tom Hipperson, 46, both caught Covid last month, and while he got better quickly, Justine’s health continued to deteriorate.

‘I’m frightened, but hope I wake up’ – Heartbreaking last words of woman before she died from Covid

Justine was advised to increase the medication she was taking to stop her body from rejecting her lungs, but was advised to call 999 later that week.

After being taken into hospital, she was placed on life support where she shared her heartbreaking final message.

She wrote: ‘I’m struggling too much. I’m going on a ventilator now. I love you all.

‘Please keep my memories alive. I hope I wake up. But my lungs are so bad inside. Love to all. Thank you for your friendships x’.

Nigerian Man Trying To Sell A Lady For N12.7M, Arrested In...