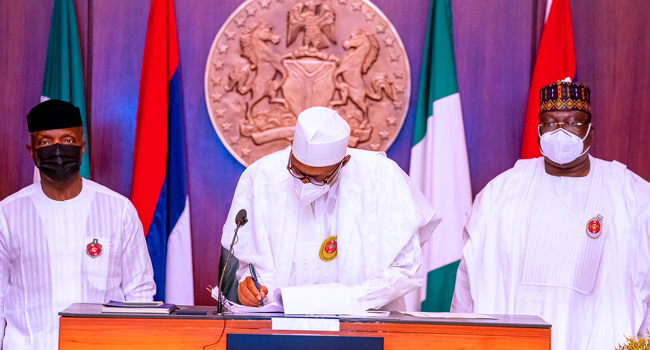 The president also signed the 2021 finance bill into law at an event at the state house today.

Buhari was flanked by Ahmed Lawan, president of the senate, Femi Gbajabiamila, speaker of the house of representatives, Zainab Ahmed, minister of finance, budget, and national planning.

This is coming less than a week after the house of representatives and senate passed the appropriation bill.

The two chambers increased the budget spending by N735.8 billion from the proposed N16.391tn to N17.126 trillion. They also raised the oil benchmark from $57 per barrel proposed by the executive to $62.

The national assembly also fixed oil production at 1.88 million barrels per day, exchange rate at N410.15 to the dollar, GDP at 4.2 percent and inflation at 13 percent.

Speaking at the event, Buhari said the 2022 Budget, just signed into law, provides for aggregate expenditures of N17.127 trillion, an increase of N735.85 billion over the initial Executive Proposal for a total expenditure of N16.391 trillion.