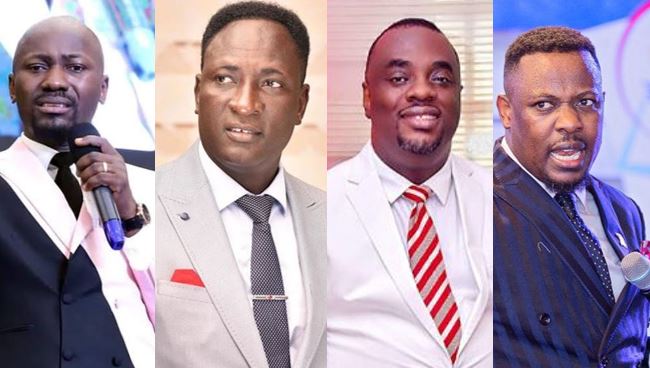 See The Prophecies That Failed In 2021

The year 2021 was beclouded with a lot of uncertainty, ailments, deaths and hardship for many people, also, some clerics passed on while some lost members of their families.

It has become a norm for prophets, pastors and other clerics to make bold assertions tagged prophecies at the end of a year or beginning of a new one regarding events that have yet to unfold.

Expectedly, the year 2021 was not short of such prophecies.

However, SaharaReporters observed that many of the pastors were more careful with their prophecies this year following the backlash they got in 2020, as none of them made a direct reference to COVID-19 and its effect, in their prophecies.

Nigerians are known to be very religious people. A report by Council on Foreign Relations noted that religion is central to the lives of most Nigerians, whether they self-identify as Christian or Muslim.

Particularly for the Christian citizens, many look forward to these prophecies which are customarily focused on politics, economy, natural disasters and general optimistic predictions about the future of religious adherents.

However, while some of the prophecies made are fulfilled, some others miss the mark while some prophets have been criticised by Nigerian netizens over their inability to foresee disasters awaiting them in the coming year.

The year 2021 was beclouded with a lot of uncertainty, ailments, deaths and hardship for many people, also, some clerics passed on while some lost members of their families.

In January 2021, Apostle Paul Okikijesu of the Christ Apostolic Miracle Ministry claimed in a series of prophecies that a sitting male governor, will die while a woman will take over after much crisis.

He had said, “A male governor will die and the Deputy Governor who is female will assume the position of the Governor of the state.

“Thus says the Lord: They will agree that the woman who is the Deputy Governor should be the Interim Governor. It will be like the case of (Goodluck) Jonathan and (Umaru) Yar’Adua.”

SaharaReporters observed that of the 36 states of the federation, only four state governors have women as their deputies: Enugu, Kaduna, Ogun, Rivers.

From January 2021 till date, there has been no official report of the death of any of the incumbent governors of the states nor a takeover by their female deputies.

At the beginning of the year, Primate Elijah Ayodele, the leader of INRI Evangelical Spiritual Church predicted that there will be cases of kidnap and fights in the Aso Rock as he called for cleansing. This prophecy was not fulfilled even though there were a series of kidnap incidents in Nigeria during the year.

He had also said, “The spirit of God says that “Nigeria must be prayerful not to lose any ambassador.”

Also, no Nigerian ambassador has been reported dead in 2021, as predicted.

The seer also asserted that the deadly COVID 19 ‘will kill’ a Health Minister and a commissioner. This prophecy did not come to fulfilment.

On COVID-19, the prophet said Nigeria will produce her own COVID-19 Vaccine, stating that the Coronavirus will spread more at the latter part of the year but it will start subsiding from the month of August.

From available records, Nigeria currently depends on vaccines supplied from advanced countries of the world.

Just recently, the Nigerian government destroyed 1 million expired dosages of the AstraZeneca vaccine. The expired dosages are part of the 2,594,100 doses of Vaccines received on the 11th and 29th October of 2021.

According to government officials, one million, five hundred and twenty-seven thousand, eight hundred and eighty-six of the vaccines (1,527,886) were said to have been utilised.

Nigeria is yet to officially announce its production of vaccines for treating COVID-19. Vaccines administered include: The Oxford-Astrazeneca vaccine, a viral vector vaccine developed by Oxford University and AstraZeneca; The Moderna COVID‑19 vaccine developed by Moderna, the United States National Institute of Allergy and Infectious Diseases (NIAID) and the Biomedical Advanced Research and Development Authority (BARDA) and the Johnson and Johnson developed by Janssen Pharmaceuticals headquartered in Beerse, Belgium.

Also, the country administers The BioNTech, Pfizer vaccine manufactured by BioNTech, Fosun Pharma, Pfizer in China and The Sputnik V vaccine developed by the Gamaleya Research Institute in Russia.

The cleric also stated that the Cherubim and Seraphim church will lose a very prominent Baba Aladura. This prophecy was not fulfilled.

A Ghana-based pastor, Prophet Nigel Gaisie, who is the founder of the Prophetic Hill Chapel had said Nigeria’s Vice President, Yemi Osinbajo will become president in 2021.

This prophecy missed the mark.

Also, Apostle Theophilus Ebonyi, the Senior Pastor of Faith on the Rock Ministry International said the nation would witness a shift in government without an election where the number two will assume the number one position without elections or coup.

He said, “2021 is the year of the Lord where God himself will be humbling some demonic powers, forces and satanic agenda bedevilling the Nation.”

“God revealed to me in the place of prayer his blessings and intervention in the affairs of Nigeria that government will witness a shift that is going to give ground to the number two citizen to become number one so saith the Lord,” the cleric declared.

As of the time of filing this report, Nigeria’s president officially remains President Muhammadu Buhari while Osinbanjo retains his position as the number two man.

The mandated prophet of Zion Heritage And Miracle Ministries, Bishop Okwudili Eze in his 2021 prophecies said some church leaders will be arrowheads of target for arrest in 2021.

Taking a clue from the #EndSARS protest which rocked the country in 2020, the prophet predicted that there will be mass demonstrations in 2021 that will affect the economy and create confusion.

While there were mass demonstrations over the arrest and detention of Nnamdi Kanu, Sunday Igboho and the recent #NorthIsBleeding protest, none of these can be said to have affected the economy negatively as the protesters had simply registered their displeasure.

Eze also stated that there will be more stringent visa policies on Nigerian politicians which will affect the innocent among them. As of now, there is no such policy in place.

He also predicted that an attempt will be made to change the capital of a Nigerian state but such a move will be resisted amidst heavy criticism. This attempt was never made.

He had also said, [b)“There shall be some good news in the power sector. Electricity tariffs shall experience a review, though not without mass protest and insistence. So the new #EndSARS will be on Power.” [/b]

Meanwhile, just recently the People’s Alternative Political Movement (TPAP-M), a coalition of individuals and organisations committed to the emergence and building of a Mass Workers Party, and the Socialist Transformation of Nigeria, announced plans to embark on protests against the recent hike in the price of gas and the impending hikes in the prices of fuel and electricity tariff.

In his 2021 prophecies, the founder of Christ Mercyland Deliverance Ministry, Prophet Jeremiah Fufeyin said the secret behind the COVID-19 pandemic would be exposed in 2021.

“God wants to expose some people behind the COVID-19 pandemic. Some people will expose others over the vaccine.

“Everybody will know the secret behind COVID-19 this year; coronavirus is a useless thing, people will be exposed this year.

“There is confusion coming regarding COVID-19 and the confusion is in favour of the children of God”.

As of now, no one has been exposed regarding the secret behind COVID-19.

A popular Prophet in Kogi State, Apostle Sunday Eleojo Wada, President and Founder of Power Must Change Hand Prophetic Ministry, Ejule in the Ofu Local Government Area of Kogi State predicted that there will be multiple deaths in Sierra Leone by 2021.

The prophet also said the National Assembly will be terribly shaken, adding that some of the senators will resign while others will go on a journey of no return. No member of the Senate or House of Representatives resigned in 2021.

Wada also said he foresaw Vice President Yemi Osinbajo having health issues in 2021. Rather than this, Osinbajo was named as the chairman of a committee saddled with the responsibility of developing and implementing a health sector reform programme.

Senior Pastor and General Overseer of Omega Fire Ministries, Apostle Johnson Suleman also gave several prophecies concerning the year 2021. While some of the prophecies were fulfilled, some were not.

For instance, he prophesied, “CBN be alert. I see fire outbreak.” Checks by SaharaReporters, however, showed that it was in 2018 a fire outbreak was reported at the headquarters of the Central Bank of Nigeria (CBN) in Abuja.

The cleric had also stated that America’s Cable News Network will have a major crisis in 2021. This prophecy was not fulfilled.

Flooding: 70 Percent Of Bayelsa Communities Under Water, Governor Cries Out....