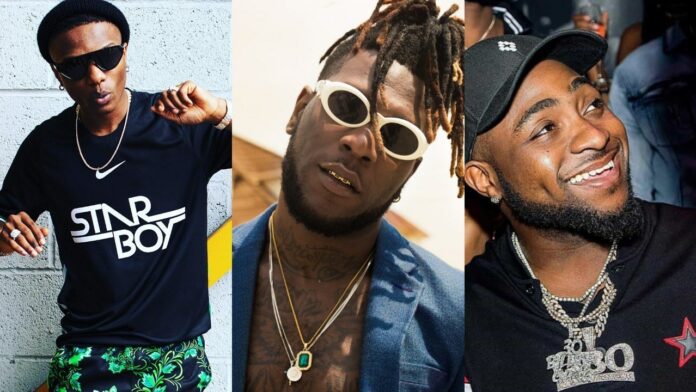 Video of Wizkid, Davido, And Burna Boy Perform On The Same Stage, Avoid Each Other While Performing

A video of Wizkid, Davido, and Burna Boy performing on the same stage at the same event has hit the net but they tried their very best to avoid each other while mingling with fans.

Both Wizkid, Davido, and Burna Boy were invited to this particular event and were all given the chance to perform on the same stage to entertain fans and music lovers at the event but then tried avoiding each other when it was time to mingle.

The host was seen taking pictures with them one after the other and the 3 artists knowing very well that they are at the same place didn’t come together to prove us wrong that they have no bad blood between them as they’ve been claiming.

Wizkid and Burna Boy are cool together but the two don’t have a very friendly relationship with Davido and that was what most people were looking forward to seeing if they will come together for just a picture to send a positive vibe out there.

But unfortunately, we didn’t see what we expected in the video circulating online but we can’t tell if something brought them together at the event at some point but we guess it would have been the topic of the day if it had happened.