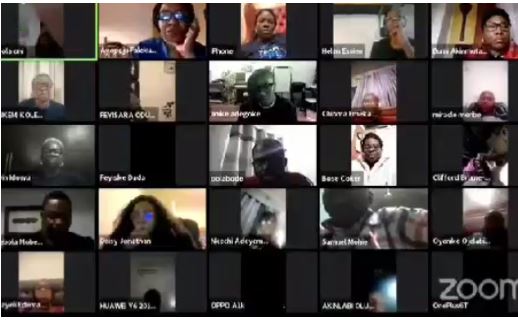 Parents of students in Dowen college Lagos and a former counselor in the school recently had a zoom meeting in the wake of the death of one of the students of the school, Sylvester Oromoni. The meeting was facilitated by the Concerned Parents and Educators network.
Sylvester, 12, died on Tuesday, November 30, after he was allegedly bullied by his seniors in the school dormitory.

A former counselor who joined the zoom meeting said the students are always left unattended to in the dormitory.

In a situation where you have several floors and no floor has a house parent monitoring the students. By the time you hear a sound and you go upstairs, the seniors have changed the story. That’s exactly what happened at Dowen college.

From the first day they moved most the students from a hired building into a permanent hostel, it was a time bomb waiting. Eventually I resigned because of that situation. The children are not well monitored”

An aggrieved mother then interjected, asking why the former staff is just saying this now after a child has died. She mentioned that her son who attended the school at some point, was also subjected to the same ”inhumane treatment” Sylvester mentioned he was subjected to by his seniors before he died.

My son is a victim. They did exactly what they did to that boy. They put of the light. They beat him. They carried a box on his head.’ she said amidst tears

”The thing that they did to Sylvester Oromoni, they did it to my son. They entered the room. They put off the light. Seven of them who brought my son to kneel down. They put a suitcase on his head. They were dancing round him like an occultic gathering. They were beating him at the same time. They took out a phone, They recorded it. That video is online somewhere. And you are telling me that you left Dowen because of the bullying. Why did you not say it so that people would not make the mistake of taking our children..I have been crying since on Thursday when I saw this video. I have not eaten. I have not drank. I have not slept. A child has died. That boy was 11 years. Same age with my son. It could have been my son that died. I was lucky. Sylvester wasn’t lucky.

You are saying this now having observed this thing for nine years. What basis are you talking? On what grounds are you talking?  They give security man in Dowen college ATM to go and withdraw N50, 000 and they begin to spend the money. Children would spend money. The children call security men by their names. ”

She said the boys’ hostel in Dowen college lacks indiscipline but that a female teacher in Dowen, Celine, ensured that the girls’ hostel is disciplined.

”The only grace the girls hostel has is because of a lady called Celine. She is the woman in girls hostel. You cannot bully in girls hostel in Dowen college. But you see the boys hostel, that third floor is the den where they commit the havoc. These children are bad. Everything Sylvester Oromoni said is the truth. They should arrest Ahmed and Valentine. These are the housekeepers.

The principal told me that she saw my son’s video of being bullied but she did not think it was important to act because they had not posted it online. She saw it and slept on it. And you are telling me that you knew and you people allowed us to be bringing our children. You collect three million for school fees and you cannot mount CCTV cameras.”

Watch a video from the zoom meeting below…

Woman’s Eyes Removed By Ritualists After Being Injected On Her Farm....