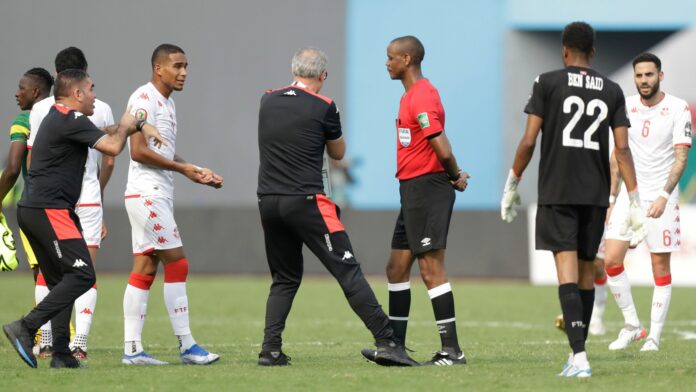 The 2021 African Cup of Nations (AFCON) clash between Tunisia and Mali yesterday afternoon ended in bizarre circumstances after the referee blew the final whistle before the 90th minute.

In a game that was eventually won by Mali, Janny Sikazwe, the centre referee, blew for full-time in the 85th and 90th minute, after a red card and two penalties had stirred controversy.

The first period of the match was short on chances and dull but the game sparked to life in the second half with Mali winning a spot-kick following a handball in the penalty area.

Ibrahima Kone scored what proved to be the winning goal via a penalty kick on 48 minutes, with Ibrahima Munkoro, Mali goalkeeper, saving Wahbi Khazri’s 77th-minute penalty before chaos ensued in the final minutes.

Sikazwe blew his whistle for full time on 85 minutes to the dismay of both nations and spectators.

The Zambian official, however, restarted the match after notification but created more controversy by blowing the final whistle again in 90 minutes — without adding extra time.

The referee blows the whistle before the 90 minutes are up…