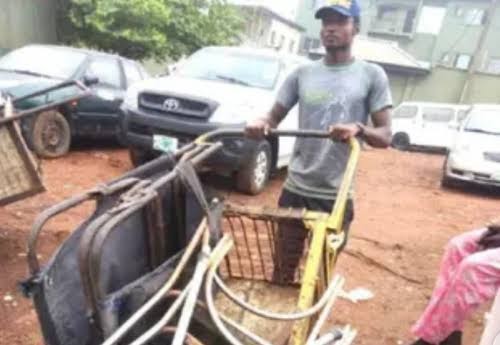 Akwa Ibom State Government has announced a ban on scrap scavengers, days after a young man was beaten to death.

Two Hausa scrap collector were beaten to death in Afaha Oku, Ikpa community, in Uyo Local Government Area of Akwa Ibom State in retaliation to them killing an indigene identified as Anietie Ekpanya, according to reports.

According to an eyewitness, Anietie had gone to collect his clothes from the laundry on January 2, and while returning to his compound, he sighted the two Hausa scrap metal collectors with some items they removed.

Upon confronting them and asking who gave them permission to enter the compound, they pounced on him and beat him till he collapsed. The scrap collectors were apprehended by resident of community, who burnt them to death.

Following the incident, Secretary to the Akwa Ibom State Government (SSG), Emmanuel Ekuwem on Tuesday January 4 announced the ban and also disclosed that the state government had to take an action in order to “curb criminality and threats to the peaceful inter-ethnic relationship” in the state.

“Sometime in 2021, multiple explosions, causing fatalities, were recorded in Oruk Anam Local Government Area in the course of scavengers sorting out what turned out to be military brand explosives.

“About four lives were lost in this incident.

“Sundays appear to be the busiest day for these scavengers who take advantage of mass church attendance to invade homes and cart away valuables leaving hapless citizens with tales of woe upon their return from Church.

“As a responsible Government, we can no longer tolerate the activities of this industry which evidently is in no way adding value to the socio- economic well being of the state but rather escalating tensions and threatening the overall peace and security of the state.

“Accordingly, the operations of scrap scavengers in the state is banned forthwith. Violators of this ban will be apprehended and dealt with according to the law.”

The state government also reiterated its earlier ban on the use of motorcycles within the Uyo metropolis and its environs.