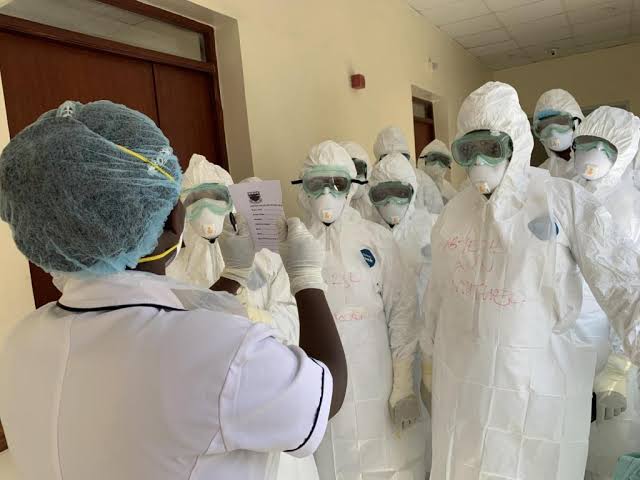 Despite the introduction of several vaccines in Nigeria and other parts of the world, analysis of daily epidemiological reports of the coronavirus disease published by the Nigeria Centre for Disease Control has revealed that the country reported a 176.9 per cent increase in COVID-19 cases from the end of 2020 to the end of 2021.

The PUNCH reports that the coronavirus disease was first reported in Nigeria on February 27, 2020. The case, which was that of an Italian citizen, who travelled from Milan to Lagos, was confirmed by the Virology Laboratory of the Lagos University Teaching Hospital to the NCDC.

The Federal Government had on February 28, 2020 activated a multi sectoral Emergency Operations Centre, which is the highest emergency level in Nigeria.

At the end of 2020, the country reported no fewer than 87,510 cases and 1,289 deaths, which included prominent Nigerians such as a Chief of Staff to the President, Abba Kyari, and a former governor of Oyo State, Abiola Ajimobi, among others.

By 2021, Nigeria, like other countries, got access to vaccines, which were said to curtail the spread of infections.

Nigeria, however, failed to meet the target set by the WHO to vaccinate 40 per cent of its target population by the end of 2021. Rather, the country was only able to fully vaccinate four per cent of the population despite the compulsory vaccination of federal workers.

Speaking to The PUNCH, a renowned Professor of Medical Virology at the University of Maiduguri, Marycekin Baba, said the increase in deaths and cases were fuelled by the rise in the number of new variants and vaccination gaps among individuals, who have refused to get vaccinated.

Baba explained that viruses mutate and the forms they take after mutation could not be easily predicted and as such could prove to be much more deadly than previous variants.

She said, “Viruses mutate and you cannot predict the nature of the variants. Some variants can be less deadly, while others can become more deadly. In the case of COVID-19, there have been different mutations and though we cannot really say which is the deadliest, reports revealed that the Delta variant wrecked havoc among the unvaccinated individuals and also the immuno-compromised persons.

“Also, when you look at those vaccinated, how many per cent of fully vaccinated individuals do we have? It is not just about taking your first dose and saying you are protected.

“No matter how you see it, vaccination is still the only way out. The virus can assume another form tomorrow, which can be much more deadly, but the only people who will be protected are those who are fully vaccinated.

“Take your vaccines and if there is a need, scientists may recommend additional boosters to make sure that individuals get adequate protection. It is better to be safe than sorry.”

On his part, a former President of the Association of Public Health Physicians of Nigeria, Prof Tanimola Akande, in a separate interview with The PUNCH agreed with Baba.

Tanimola said the rise in cases was just the tip of the iceberg as many more cases would be reported should there be increased testing and surveillance.

He stated, “Well, what this means is that surveillance was much better in 2020 than it was the previous year and we were able to pick more cases. It means that many people, whenever they suspected that they hadCOVID-19, showed up for tests. But this is just the tip of the iceberg as the figure is not a true representation of what is really going on in the communities.

“Lots of people died of COVID-19 without even having the opportunity to visit hospitals and even  get access to test results; a lot of other individuals are also not showing up for tests.

“When you look at other countries, you will see that they reported higher cases daily and the reason is this, testing is good and the surveillance is high. The new variants can also be said to have fuelled the increase in cases, especially the Delta variant.”

Concerning the impact of the vaccines, Tanimola said, “How many people are fully vaccinated? The vaccine might prevent those who have taken it from dying, but someone who is not vaccinated won’t be safe; so, we can’t say because there are vaccines now, the cases will not increase. The first question should be how many people have taken their vaccines.”

Baby Falls From Moving Tricycle, Gets Crushed By Petrol Tanker In...