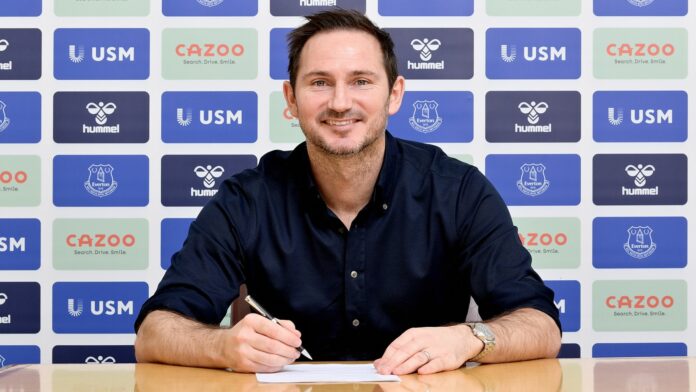 Frank Lampard has been confirmed as the new manager of Everton just over a year after he was sacked from his post as boss of Chelsea.

The former Blues legend replaces Rafael Benitez as permanent boss of the Toffees, though Duncan Ferguson did take charge of their most recent clash against Aston Villa.

After his appointment had been confirmed, Lampard sat down with Everton’s club website to express his delight at his new role.

Lampard said: “It is a huge honour for me to represent and manage a club the size and tradition of Everton Football Club.

“I’m very hungry to get started. After speaking to the owner, Chairman and the Board, I very much felt their passion and ambition.

“I hope they felt my ambition and how hard I want to work to bring it together.

He continued by praising the Goodison Park faithful.

“You can feel the passion Everton fans have for their club. That will be hugely important.

“As a team – the competitive level that the Premier League brings and the position we are in the table – we certainly need that.

“It’s a two-way thing. I think Everton is a unique club in that you can really understand what the fans want to see.

“The first thing they want is fight and desire and that must always be our baseline.

“My first message to the players will be that we have to do this together. We’ll try to do our job and I know the fans will be there backing us.”

Everton’s divisive owner Farhad Moshiri has also issued a statement, giving fans an insight into the interview process and how Lampard won him over.

“I am really delighted that Frank has joined us. He is an impressive young man and off the pitch,” Moshiri explained.