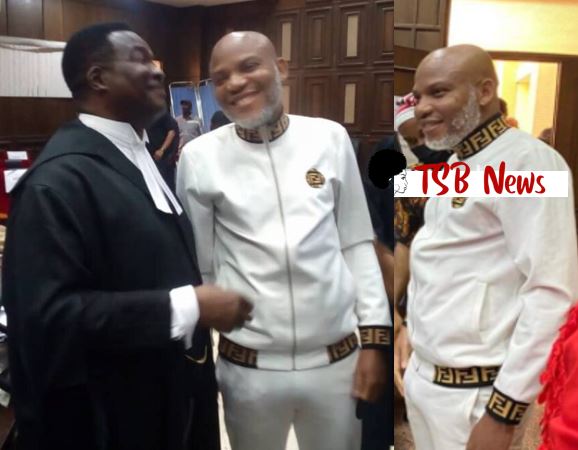 Justice Binta Nyako of the Federal High Court in Abuja has ordered the Department of State Services to allow the leader of the Indigenous People of Biafra, Nnamdi Kanu to change his outfit.

Kanu, who is facing charges bordering on terrorism and treasonable felony, was arraigned in court on Tuesday.

His lead counsel, Mike Ozekhome, SAN, drew the attention of the Judge to the treatment his client was being subjected to in the custody of the DSS.

He said Kanu was still being kept in solitary confinement, adding that inmates who greeted him were also being subjected to the same treatment.

This is despite an order by Justice Nyako for the DSS to allow the IPOB leader to practise his faith, have his bath, change his clothes and eat properly.

In response, Nyako reiterated her earlier order for the DSS to allow Kanu to enjoy some comfort. She, however, reminded his counsel that a detention facility is not a five-star hotel.

“I don’t want to see him in these clothes again. This one is almost off-white. Also, make sure that you allow him to exercise,” Nyako added.