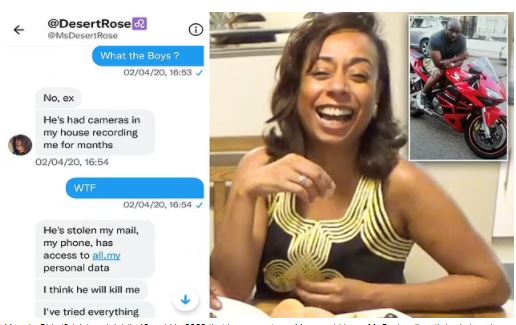 ‘I think he will kill me’ – Haunting texts of mother of two, Yasmin Chkaifi who was stabbed to death by abusive ex in Maida Vale

A mother-of-two who was stabbed to death by her abusive ex in Maida Vale told a friend two years ago ‘I think he will kill me’ and ‘he’s had cameras in my house recording me for months’ in haunting texts.

Yasmin Chkaifi, 43, said in 2020 that 41-year-old Leon McCaskre had placed cameras in her flat and had stolen her mail and phone in order to get her personal information.

She was stabbed to death in front of horrified onlookers in Chippenham Road, Maida Hill, west London, on Monday, with a driver mowing down McCaskre in order to stop the attack.

Her friend Adele-Sara Richards, who knew her as Yaz, said that in April 2020, Ms Chkaifi messaged her to say: ‘He’s had cameras in my house recording me for months.’

She went on: ‘He’s stolen my mail, my phone, has access to all my personal data. I think he will kill me. I’ve tried everything.’

It follows a 26-year-old driver being arrested on suspicion of murder after ploughing into McCaskre as he stabbed his ex-partner to death in the street in front of horrified witnesses.

A number of people had desperately tried to stop McCaskre before the driver hit him with his blue Renault in Maida Vale, north west London on Monday morning.

Relatives of Ms Chkaifi, who had two sons, have also praised the driver for attempting to stop the fatal attack. He was arrested on suspicion of murder and has since been released on bail until late February while the police investigation continues. 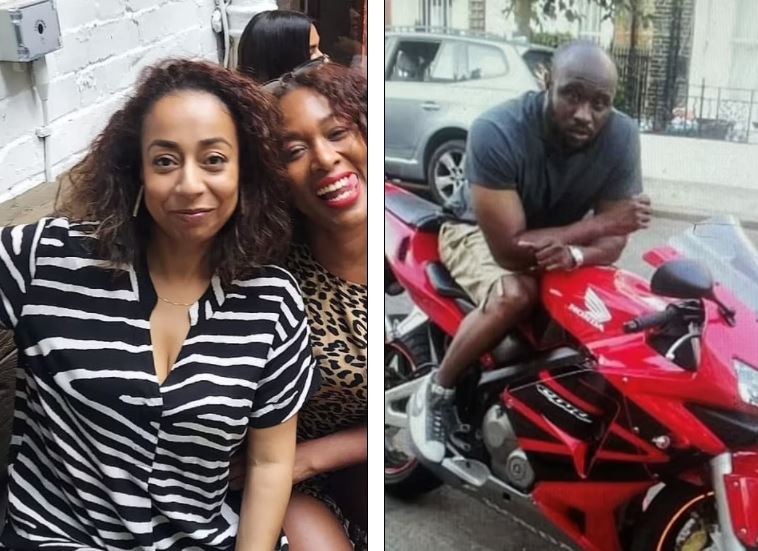 On Wednesday nearly 9,000 people had signed a petition on Change.org entitled: ‘Maida Vale driver is a hero and shouldn’t be charged with murder’.

A friend of the driver, who did not want to be named, said that he is married with two children and a pregnant wife.

He said: ‘My friend is in shock and is trying to process what’s happened. He was driving to work and saw a woman being attacked. At first he shouted at the attacker but when that didn’t make a difference, he locked his car doors and drove at him.

The friend added that the driver is of Muslim origin from Chechnya and has only been in the UK for around four years. He said that the driver was going to work in Bayswater and was driving through Maida Vale when he saw the attack unfold.

He said: ‘My friend is very humble and doesn’t see himself as a hero. He was only doing his duty as a good Muslim.

‘He’s devastated by what happened because he wanted to save this woman’s life. He stood up for what is right and should not be punished. He hasn’t done anything wrong, doesn’t want any glory and his prayers are with the dead woman’s family.’

Ms Chkaifi’s family branded the driver a hero for trying to save her – and even called for him to get a medal from the Queen as they took aim at the police for not doing enough to help her.

‘There is no way he should go through the justice system for what he did. He tried to help her and for my sister and our family he is a hero.

‘If anything we want to thank him for what he did. The man responsible is called Leon. He was supposed to be in court last week for breaching a stalking order but didn’t show up.

‘He was a demon. He was a monster but the driver is a hero. He saw what was happening and tried to stop it. I want to say thank you again.’

A warrant is believed to have been issued for the arrest of McCaskre three weeks after he failed to appear at Westminster Magistrates Court on a charge relating to Ms Chkaifi.

McCaskre had an anti-stalking order against him from the Met Police with Ms Chkaifi, a mature student of Moroccan descent, securing a restraining order and even installing a panic alarm in her flat because she was so frightened of her ex-husband, one of her sons has claimed.

Despite the order, she was horrifically attacked by McCaskre on Monday, with the ‘monster’ stabbing her more than 10 times.

Ms Chkaifi’s son, who asked not to be named, accused Scotland Yard of ‘doing nothing’ to help her in the years before the horrific murder on Chippenham Road in north-west London despite repeated warnings about McCaskre. 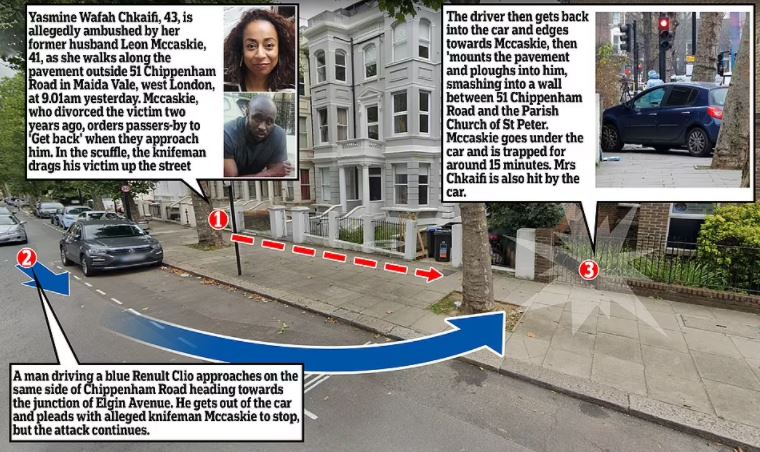 Responding to the allegation, the Met Police said: ‘A Stalking Prevention Order had been obtained against the deceased man, as a matter of course there will be a review by the Met’s Directorate of Professional Standards NPTD further.’

The revelation that the killer was the subject of a stalking order is the latest in a string of failures to hit the Met on a day headlines focused on Scotland Yard announcing its criminal probe into lockdown breaches in Downing Street and Whitehall.

Bystanders tried to stop McCaskre after he pounced on Ms Chkaifi at around 9am yesterday, stabbing her more than ten times. But the savage attack was only halted when a passing motorist ran over the knifeman on the pavement, also hitting the mother-of-two. Police last night said a 26-year-old man was arrested on suspicion of murder. 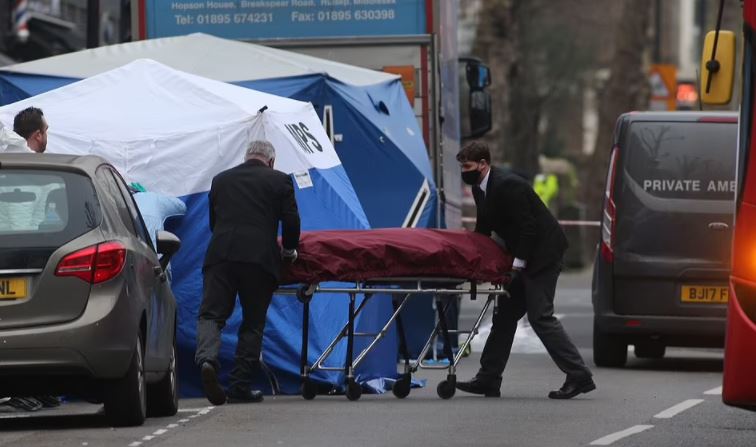 ‘It was a very abusive relationship which got worse after the divorce. My mother was continually being harassed and intimidated by this man. He made her life hell,’ the son told MailOnline.

First Man to go public with his HIV status dies after...