Lanre Gentry, the ex-husband of Nollywood actress, Mercy Aigbe, has confirmed his fatherhood to their son, Olajuwon, which they had during their seven-year marriage.

Following the unveiling of Aigbe’s new lover, Kazim Adeoti, social media users have raised concerns over the resemblance of the actress’ son and her new lover.

Placing their pictures side by side, a tweep, @emmaikumeh, said, “The resemblance between Mercy Aigbe’s son and her new husband is striking. She cannot even deny it.

“I hope her ex-husband does a paternity test. Things are happening. Every day, we see stories that reinforce the need to do DNA as a father. The street is military.” 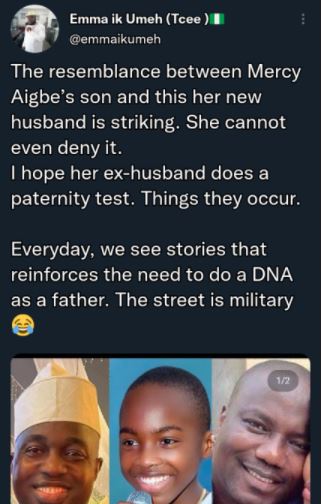 Other social media users have also called for a paternity test to be carried out to ascertain the fatherhood of the 11-year-old son.

Confirming the paternity, Gentry took to social media on  Monday, saying, “What is life? I thank everyone for your comments and advice about my lovely son, Olajuwon Gentry.

“My son is my son 100%. I love him so much. There is nothing in this world that can separate me from my children.”

Advocate Reveals How Man Stuck His Hand Up Her Skirt In...