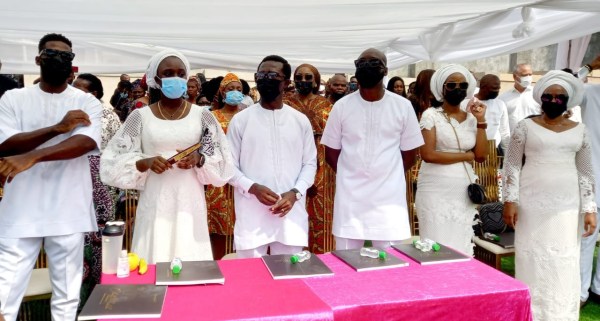 What a sad and emotional day it was for billionaire businessman, Cosmas Maduka, founder of Coscharis motors, as his wife, Charity, who died on November 28, 2021, was laid to rest in Nnewi, Anambra state yesterday, January 7, 2022.

The funeral mass held at the Maduka residence, Coscharis Street, Umudim, Nnewi was attended by Governor Willie Obiano and wife Ebele, some members of Anambra State Executive Council, family, friends and well wishers from within and outside Anambra State.

At the well attended event held Queens Park, Victoria Island, the late wife of billionaire businessman and President of the Coscahris Group, Dr. Cosmas Maduka, was variously described as very humble, generous, amiable, honest, hardworking and a truly Godly woman who was a quintessential Christian.
Leading off the flurry of tributes was the deceaseds friend of 35 years and fellow faithful, Mrs. Ayo Akintade, who described her as very courageous, a rare gem and a true Christian that never backed out in the service of God, even when she had health challenges.

She is an example of what a true Christian should be, She remarked.
To another friend of the family, Dr. Charles Mgbe, the departed was a stabilising factor. She was glue that held the Cosmas Maduka family together and the woman behind the throne.”
In his tribute, the late Mrs. Madukas brother, Kenneth Ikedife, recalled that her 63 years-old sister surrendered her life very early to God – accordingly to him, at a time it was almost a taboo to be born-again; unlike today that it is fashionable for people to just go to church and be identified so.

Ikedife got an ovation when he informed the guests that his sisters devotion to God met a match in another firebrand Christian, Dr. Cosmas Maduka, adding that at a point, their pace as husband and wife was too much for me to follow.
He disclosed that many beneficiaries of late Mrs. Madukas generosity, including those whose house rent and childrens school fees she was paying, jave been calling him on phone with some of them crying profusely. And I end up being the one consoling them, rather than them consoling me.

Fred Amobi, who apart from being the Executive Director Operations, Coscharis Group, has been close to the Madukas, said the departed was a virtuous and capable wife who was more precious than rubies.

There are many virtuous and capable women in the world, he stated, but you Charity Maduka surpass them all.”
Amobi waxed both poetic and biblical in his tribute: “Her husband can trust her,and she will greatly enrich his life. She brings him good and not harm all the days of her life.
“She goes to inspect a field and buys it; with her earnings she plants a vineyard.
“She is energetic and strong, a hard worker. She makes sure her dealings are profitable; her lamp burns late into the night.

Eulogies also came from Dr. Mrs. Nneka Omotoyinbo, who urged all to emulate her simplicity as Christian who would rather be identified as a God fearing woman than as an affluent person.
Most of the speakers found it difficult to talk about Mrs. Maduka in past tense, including Adegoke Osunniyi, a lawyer, who described her as a quintessential Christian lady, who belonged to a family which despite their wealthy, are still very humble.
The eldest child of the Maduka siblings, Cosmas Jr. Maduka, spoke glowingly of his late mother, saying she was a woman known for her integrity and hard work.

Mum was a remarkable woman; a God-fearing woman. She was a virtuous woman that personified integrity, hard work, and a charitable heart. Her dedication to her family is something I strive to emulate and provide for my family every single day.
Relevant biblical passages were read by the daughter and daughters-in-law of the deceased, including Romans 38, verses 35-39, by Charity Maduka, her daughter.
Present at the Night of Tributes very important guests, including former governor of Anambra state, Peter Obi; APC chieftain, Joe Igbokwe; and Chisco Group Chairman, Dr. Chidi Anyaegbu, among many others.

Cosmas Maduka is publicly known for his Christian faith. According to Maduka, he gave his life to Jesus early in life and this had tremendous positive impact on his life, in addition to listening to inspiration talks by William Branham.

Before her death, his late wife Charity Maduka birthed four sons and daughter for him.

Alex Iwobi Reveals Why He Snubbed England To Play For Nigeria