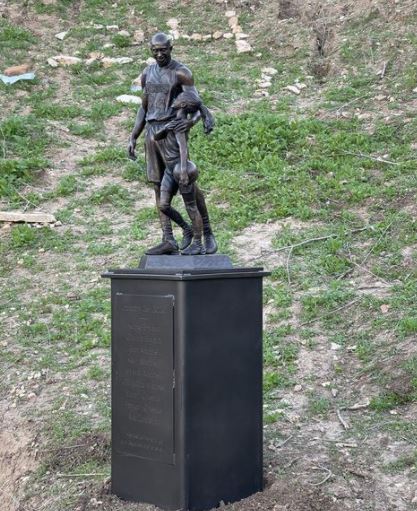 A statue of the late Kobe Bryant and daughter Gianna was placed on the site of their helicopter crash in Calabasas, California, on Wednesday, two years to the day of the tragic deaths of them and seven others.

The statue was created by sculptor Dan Medina and showed Kobe, in his Lakers uniform and with his arm around Gianna, who is also wearing a uniform while holding a basketball by her side. The two are looking at each other with big smiles.

Medina told NBC Los Angeles that he brought the 160-pound bronze statue to a hilltop in Calabasas at 4 a.m. on Wednesday, and that it will remain there temporarily.

The statue has the names of the Bryants and the seven other victims in the Jan. 26, 2020, helicopter crash — John Altobelli, his wife, Keri, and their daughter Alyssa; Christina Mauser; Sarah Chester and her daughter Payton; and pilot Ara Zobayan — inscribed on its base.

The helicopter carrying all eight passengers was on its way to a girls’ basketball tournament that Gianna, 13, was due to play in. It crashed in the hills west of Los Angeles amid foggy weather, and federal safety officials have since blamed pilot error for the wreck.

Controversial Pastor Says He Never Went To Heaven, Claims He Was...