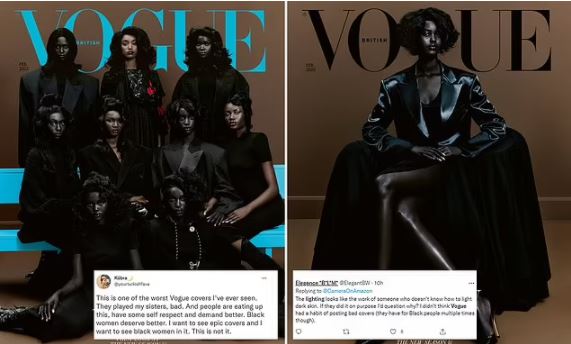 The cover of British Vogue‘s February issue featuring nine black models has been branded ‘offensive’ on social media as critics claim bad lighting and poor styling hid the women’s features and made their skin blacker to cater to the ‘white gaze’.

It marks the first time Vogue has featured a group of black women this size on the cover, for an issue celebrating the rise of African models, and was photographed by Brazilian photographer Rafael Pavarotti, who has previously shot black models in the same fashion, making their skin look ultra-dark. 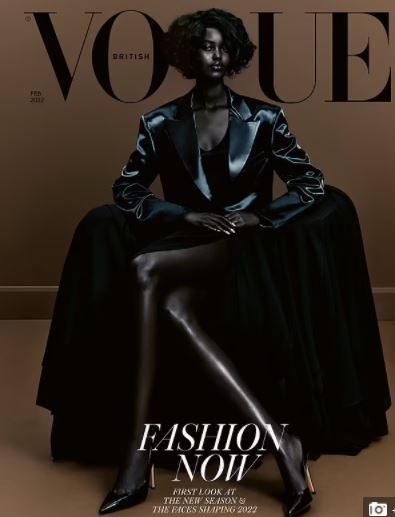 Mr Enninful was appointed editor of British Vogue in 2017, taking over from Alexandra Shulman, after the publication was criticised for a lack of diversity, and promptly assembled a woke squad of 15 women to bring diversity into editions across Europe.

However, this latest imagery has been met with furious backlash online, with dozens of fans saying the ‘badly lit’ image appeared to darken the models, who have a range of skin tones, to a point where they were unrecognisable and look like ‘mannequins’.

A behind-the-scenes video of the shoot featuring the models having their hair and make-up done shows the diversity of their skin tones, sugesting that it was the ligthing rather than cosmetics that made them look so different.

One critic commented: ‘British Vogue? So…they gathered all of these beautiful women and decided not to use lighting properly? One can’t even identify who is who! And the wigs? Those women have very beautiful fascinating dark skins, so why DARKEN them like that?’

A fellow critic accused the Brazilian photographer of catering for the white gaze by ‘fetishising’ the models and exaggerating the models’ skin tones, saying: ‘You can be unapologetically black without caricature.’

Another critic of the cover commented: ‘Edward Enninful was foul for that Vogue cover. That lighting, wigs, outfits, errything was anti-black.

‘I don’t care, I don’t care. You took the most beautiful women on the planet and made sure we couldn’t see them on an issue about visibility? @BritishVogue, shaking my head.’ 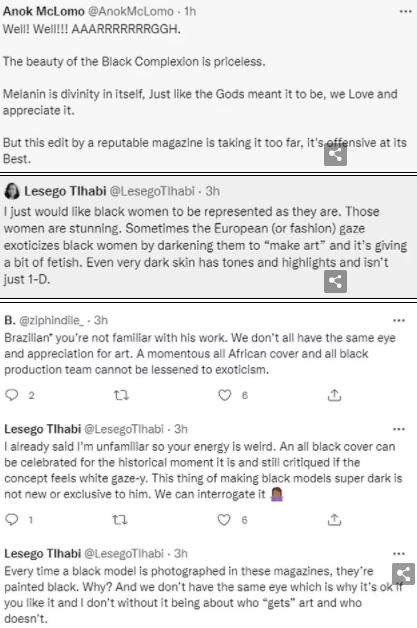 A fifth wrote that it was ‘honestly terrible’, while another added: ‘Look I am a fan of British Vogue since Mr Enninful became EIC but I’m honestly not sure why this cover is not well-lit and why the models are made to be mannequinn-esque and we lose their features and beauty.’

One commented: ‘Why are they blending in with the garments? Why not well lit and with colour that compliments their features?’

Piers Morgan writes About Being Done With Kim Kardashian & Her...