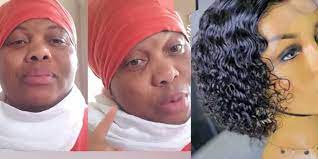 In a viral video, a Nigerian evangelist alleges that many popular hairstyles and hair practices have unintentionally caused men and women to sin against God.

Tsbnews gathered that according to the Evangelist, wearing wigs, using weavons, relaxers, hair gels, and even having haircuts as a lady, according to her, are all sins that will lead to hell.

The self-assured missionary admonished her audience, urging them to repent since the hairstyles and hair routines she outlined are from the evil realm.

Admonishing her audience, the self-assured evangelist called on people to repent because the hairstyles and the hair routines she listed are from the satanic world.

An Instagram user @fashiondoctor19 reacted to the video saying, “It seems heaven is for no one.”

“Someone needs to tell her that wearing orange is a sin, It’s not a God-created fundamental color”, @obial said.

It will take Jesus, Allah and native doctors to fix Nigeria...