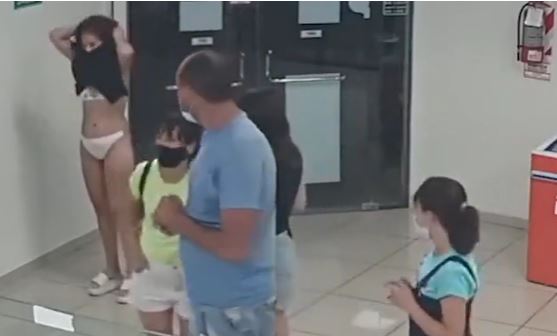 This is the moment a fearless woman entered an Argentinian ice-cream parlour in her undies because she wanted to use her dress as a face mask to be served.

The bizarre scene was filmed in the city of Godoy Cruz in the western Argentine province of Mendoza at around 10.40pm on January 1.

In the CCTV footage, a father and his three daughters are seen approaching the counter to place their order as the woman enters the parlour, apparently in her undies.

However, the half-naked woman is told to put on a mask while she tries to tie her black dress around her head.

The woman apparently protests as the father decides to lift his mask over his nose to avoid being told off as well.

She then gives up trying to tie the dress and leaves the store after being refused service.

The woman arrived at the ice-cream parlour with 10 other people, all of whom did not have a face mask with them, according to Cronica.

The woman, whose name was not reported, reportedly told staff members: ‘Don’t ask for my face mask, I’m putting it on.’

Cronica said the group of friends were eventually able to buy 11 ice creams after someone managed to source a face mask.