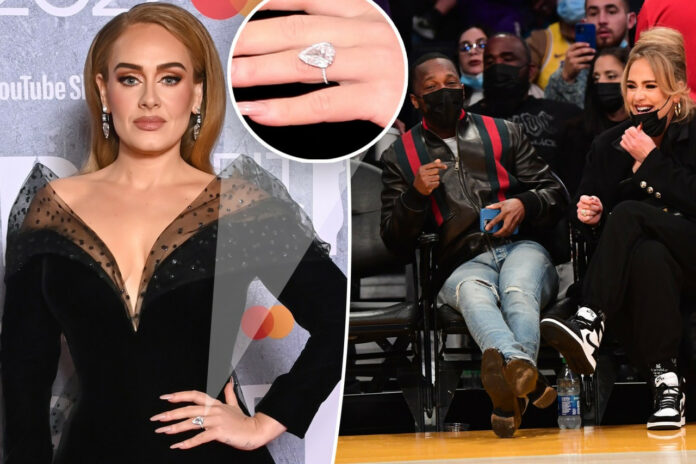 Before taking home the Song of the Year trophy for “Easy on Me” at the event on Tuesday, February 8, Adele, 33, walked down the red carpet in a sleek black Giorgio Armani Privé gown.

The performer completed the look with a Lorraine Schwartz pear shape ring on her left hand, quickly igniting engagement rumors amid her romance with her sports agent boyfriend Rich Paul.

A rep for celeb-loved jeweler Lorraine Schwartz has also confirmed that Adele is wearing a ring from the designer’s collection.

The duo were first linked in July 2021 when they were spotted together at a basketball game.  The U.K. native made her new relationship Instagram official in September 2021, shortly after she finalized her divorce from Simon Konecki. The exes, who share 9-year-old son Angelo, called it quits in April 2019 after seven years together.

Tuesday’s red carpet marks Adele’s return to the BRIT awards after a 5-year hiatus, and her first public appearance since abruptly cancelling Weekends with Adele, her Las Vegas residency.

But the singer was in good spirits at her BRITs homecoming, and even joked with reporters on the carpet that she was excited to get McDonald’s after the show. She, of course, also picked up a few awards.

Meghan Markle Is Not Trying To Reconcile With Her Father –...