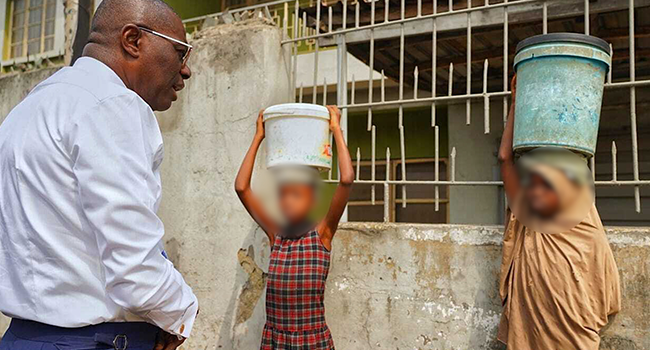 In a Twitter thread yesterday, Jubril Gawat, senior special assistant to the governor, said Sanwo-Olu was on his way to an event when he stopped his convoy to speak to the girls.

Gawat said the girls, whose names are Suwebat Husseini and Amarachi Chinedu, were on their way to “deliver buckets of peeled beans and pepper” to a vendor.

“Governor Jide Sanwoolu on his way to an official function today, momentarily halted his convoy to attend to a disturbing situation. It was a sight of two underage girls on an errand for a bean cake vendor during school hours,” Gawat wrote on Twitter.

“Time was 11am; the girls were expected to be in school. But, both Amarachi Chinedu, 9, and Suwebat Husseini, 12, were forced to skip school by their parents in order to serve some domestic assistance.

“The girls were going to deliver buckets of peeled beans and pepper to a grinder when the governor sighted them at Anthony Village. It was a glance that presented a discomforting image for Mr gov, who revved his convoy to a stop to find out the reason the girls were not in school.

“Amarachi’s story [made] the governor shudder throughout the encounter. Her mother is a teacher, but was not allowed to go to school because her parents could not afford the current session’s tuition fees. Amarachi would have to miss a school year because of this reason.

“Suwebat’s mother is the bean cake seller for whom the girls were running an errand. Her parents, who are Jigawa state indigenes, relocated to Lagos months back. Suwebat’s four male siblings were all in school at the time she was stopped on the road by the governor.

“But her parents preferred she stayed back home to help with some domestic chores. The decisions taken by girls’ parents, Sanwo-Olu said, could rob the little ones of their innocence, their future and put them at a disadvantage among their peers. The governor stressed that his encounter with the girls left his heart bleeding.

“Coincidentally, the governor was on his way to formally launch the Social Welfare Integrated Programme (SWIP) Initiative – a partnership between Government agencies and the private sector to standardise welfare administration for the vulnerable children, elders and those suffering mental disorders – when he saw the two girls roaming the street at school hours.

“Salvaging the situation, Sanwo-Olu, at the scene, told the girls he would personally take up the responsibility for their education and upbringing, promising to enrol them in school to continue with their education. The governor’s decision had been communicated to the girls’ parents.”