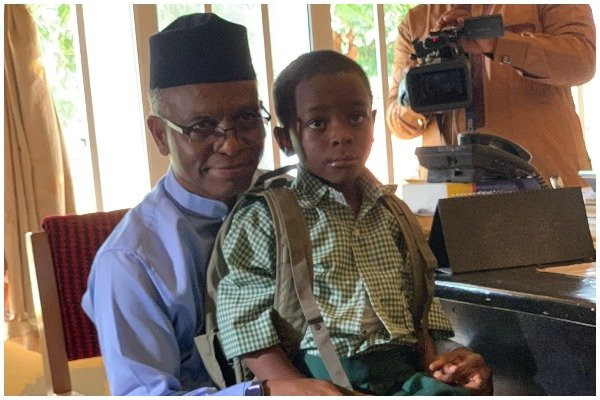 The Governor of Kaduna, Nasir El-Rufai, has said he pulled his son out of a public school due to kidnapping threats.

This is as he said his decision to enrol his son in a public school to affirm his confidence in the Kaduna State education system.

El-Rufai said this on Thursday during the weekly ministerial briefing organised by the Presidential Communications Team at the State House, Abuja.

He revealed that his government had hired more people than it had sacked in the last five years, adding that 7,700 qualified secondary school teachers have been recruited and would be deployed once he was done purging secondary schools of underqualified teachers.

“We fired 22,000 teachers and hired 25,000. We have tested them recently, some of them have fallen back and failed. We are going to fire them and hire more people. We are determined to improve teacher quality because the teacher is education, it’s not the classroom.

“We all thought the thugs were going to primary schools. Now we have to get rid of some teachers in secondary schools as well. But we have hired about 7,700 secondary school teachers. They are just standing by for us to ease these ones out. And we have taken a decision as public officers to enrol our children in public schools.

“I took my child to public school because we want to show that we believe in the quality of public education which we all got and that I had to pull my son out because some people wanted to mount a special operation to kidnap him. I don’t think they will succeed, but it will put other children at risk.

“So I pulled him out. So he’s getting home-schooling until the situation improves,” the former FCT Minister explained.