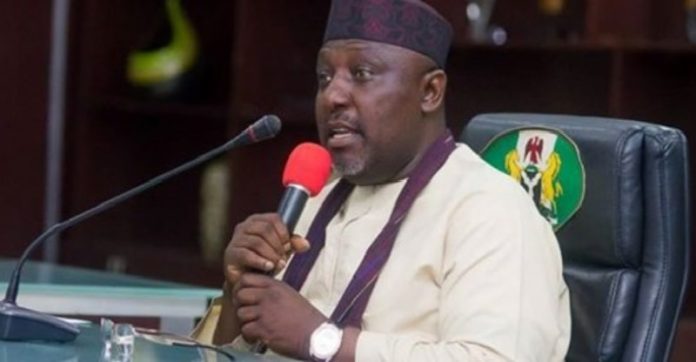 Former Governor of Imo State and Presidential hopeful, Rochas Okorocha, has stated that he saw members of the proscribed Indigenous People of Biafra as poorly educated children, not terrorists.

This was as he accused the current government of Imo state of mishandling the security crisis; stating that the proscription of the Indigenous People of Biafra as terrorists was an unnecessary move.

Okorocha disclosed this on Thursday to State House Correspondents shortly after a closed-door meeting with the President, Major General Muhammadu Buhari (retd.).

Quizzed on the security crisis in Imo State and the Southeast, he blamed the “poor handling” by the current Imo state government, saying, “Wherever things are not working well, hold the leadership responsible. I was Governor of Imo state for eight years. And within those eight years, there was absolute peace in that land. IPOB did exist. And all these additional forces existed too.

“It is the poor handling by the state government that exacerbated this to what it is today. If I had remained the Governor of the state at this time, you wouldn’t hear what you’re hearing.

“IPOB are our young men, our sons and daughters, and let no Igbo man tell you otherwise. They believe that they have been marginalised in terms of infrastructure and appointments, and they’ve believed this for a long time. But we’re able to assuage them and give them confidence that things will get better.

“But there was no need to have handled the IPOB matter the way it was handled. In the first place, bringing the Air Force and the Army into the matter. Raiding from the air was wrong and completely wrong. Just as it is also wrong for these young men to have gone to the police headquarters shooting and killing people.

“I don’t support any of them either. Today they have turned out to be terrorists. But for me, I don’t see them as terrorists. I see them as children who have not been properly educated on the happenings.”

Asked if the Federal Government was wrong to proscribe IPOB as terrorists, he said, “The activities of IPOB called for that. But it was a needless action to have even started. Something that you can handle and not allow to escalate. If the federal government made them to call them terrorists, it is the state government that made the recommendations and created that image that presented the boys as terrorists.

He also declared that the recent episodes between him and the Economic and Financial Crimes Commission was politically motivated by “cowards who wouldn’t want to expose themselves.”

On February 1, 2022, the EFCC filed N2.9bn fraud charges against the lawmaker representing Imo West Senatorial District. The development came just hours after he officially declared his presidential bid for 2023.

Speaking on Thursday, Okorocha said the fresh charges were politically motivated, which is why he was in the State House to seek the President’s intervention to avoid continued “harassment” by the anti-graft agency.

He said, “I intimated Mr President on what is going on between me and Economic and Financial Crimes Commission and the harassment and intimidation that I’m getting from the EFCC, literally on a daily basis. And to inform him that I have court judgment and two court orders for different judgments, which stops the EFCC from harassing and intimidating me. EFCC has refused to obey the law.

“So I have to come to inform Mr President that EFCC should be made to obey the law that established it. And without the law, there wouldn’t be an EFCC. And the desperations with which they go about any affair that concerns me should stop. The EFCC claimed that they recovered the sum of N5.9bn from my account, which the court found to be untrue. In other words, they were biased, and they prejudged me. On that basis, the court ruled and ordered that they should not interrogate and harass me further. This has also not been obeyed.

“Why I say it is politically motivated is that some people are instigating the EFCC to do this, which is wrong. But as to who particularly, the person must be such a coward who doesn’t want to expose himself.

“And there are people like that who wouldn’t want to expose themselves but stay under doing all kinds of things. I call them coward because they can’t stand up to what they believe in.

“My suspicion at this point is immaterial. What is more important is that the EFCC should obey a simple court judgment and court order.”

The former Governor who explained that he was in the State House to “demand justice,” argued that he is not seeing the President avoid being investigated by the EFCC rather to make the anti-graft agency comply with extant orders issued by the court.