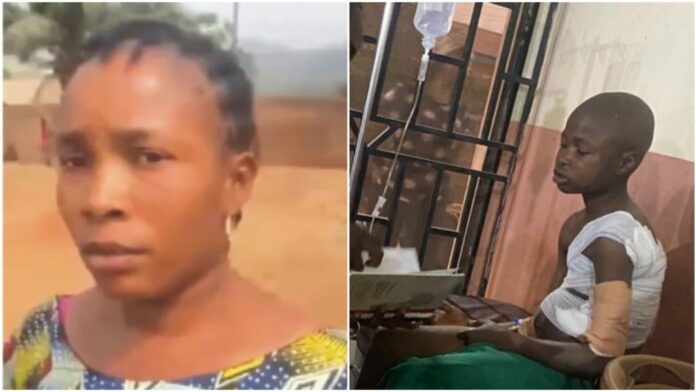 Mrs Opeyemi Omoyemi, a 36-year-old mother of four, was arraigned in court on Monday for inflicting physical injuries on her 12-year-old house help, Joel Sunday.

Omoyemi, a widow, was prosecuted before a Magistrate Court in Akure, the capital of Ondo State, on a five-count bordering on attempted murder, child abuse and violence against someone, amongst others.

The defendant was accused of inflicting many injuries on the body of the underage house help with a stick and razorblade after she accused him of stealing meat from the pot.

According to the prosecutor, Emmanuel Tanimowo, the defendant committed the crime at her residence at the Idi-Mango Adewale axis of Ondo road in Akure, the state capital, on February 6, 2022.

The Prosecutor added that Mrs Alice Ayedun, a community health officer, noticed the boy writhing in pain with blood streaming from various parts of his body which has been cut after which she reported the incident to the police.

“To save the boy from the woman, Ayedun pretended to be a nurse and said she was taking him to the hospital for treatment. She then took the youngster to the Fanibi police station to report the incident, which resulted in the defendant’s detention.

“She confessed to the crime at the police station, saying she saw the boy take all the meats in her soup pot. She claimed that as soon as the youngster noticed her, he tried to flee, but she caught him. She later took him to the sitting room, where she cut various parts of the boy’s body with the razor blade.

“The boy was later taken to the police clinic and is currently undergoing treatment but still in critical condition.”

With the defendant pleading guilty to three of the charges against her and not guilty to count three, Catherine Ogunjebi who held brief for the International Federation of Women Lawyers, FIDA, urged the court to remand the defendant in a correctional facility.

However, the Defence Counsel, Gbenga Allen appealed to the Magistrate to temper justice with mercy as the defendant was a first time offender.

Following the prayers of the counsels, the Magistrate, Mrs O.A Edwin adjourned for sentencing and trial till February 14.

The magistrate also ordered that the children of the defendant be taken to a children’s home for custody.