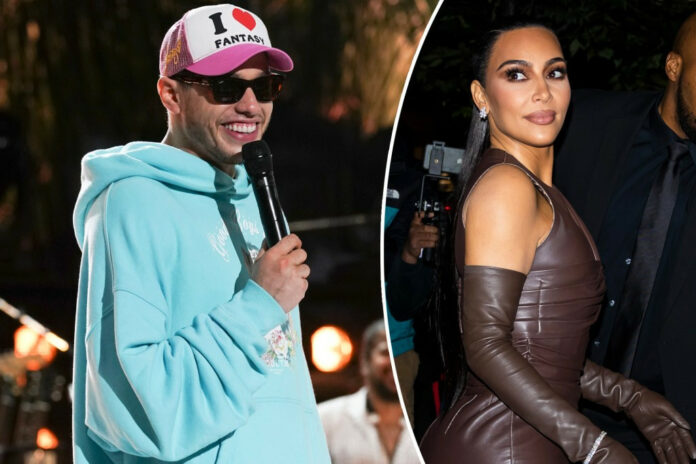 Pete Davidson publicly referred to Kim Kardashian as his “girlfriend” for the first time on Monday February 7.

The Saturday Night Live star was speaking with PEOPLE (The TV Show!) about his upcoming Super Bowl commercial, and opened up about his personal life and his experiences in the media spotlight.

“I don’t have Instagram or Twitter or any of that stuff. So, most of my daily life is getting into cars and showing up to a set.

“Or, if I’m off, I just either hang with my friends or chill with my girlfriend inside. So I don’t do much.”

28-year-old Davidson and 41-year-old Kardashian sparked romance rumors in October, shortly after she made her SNL hosting debut, and confirmed their relationship in a series of PDA-packed dinner dates the following month.

The romance between the pair comes amid Kardashian’s increasingly contentious divorce from estranged husband Kanye West, and follows Davidson’s string of high-profile romances, including an engagement to Ariana Grande, which was called off in October 2018.

Despite the media scrutiny and intense fan interest, Davidson said that it hasn’t had much of an impact on his actual day-to-day life.

“Once in a while, someone will scream something at you, or it might be hard to get Dunkin’ Donuts.

“But other than that, it’s pretty fine.

“It’s not awful. It could be way worse.”

DJ Cuppy replies those who criticized her for distancing from feminism