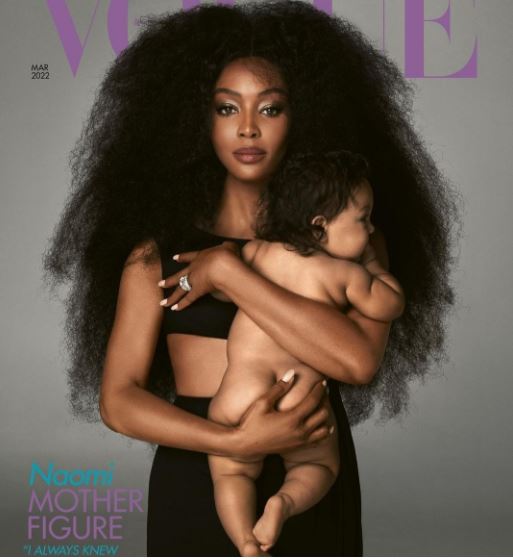 She wasn’t adopted. She’s my child – Naomi Campbell says as she shows off her daughter

Naomi Campbell, 51, has shown off her daughter to the world while declaring that her baby was not adopted.

The supermodel posed for pictures with her little girl, revealing her face for the first time, as she told in a shoot for a Vogue magazine cover

Naomi, who welcomed her daughter at age 50, told the publication: “She wasn’t adopted – she’s my child.”

Naomi looked incredible on the cover of the mag as she posed up with her baby cradled in her arms.

Before now, she hasn’t shared any pictures of her baby’s face.

The 51-year-old also told the mag that very few people knew she was planning parenthood.

She said: “I can count on one hand the number of people who knew that I was having her. But she is the biggest blessing I could ever imagine. It’s the best thing I’ve ever done.”

Naomi also talked about her incredible career, which this season will see her walking in shows in Paris, Milan and London for Versace, Alexander McQueen, Balmain and Lanvin.

She said: “I still enjoy it but it’s nerve-racking! Because I’m 51 years old walking with girls who are 18! It’s great to be with these young ‘uns at my age, but I have to say, at one of the shows I was like, ‘Come on, girls! Pick up your feet! Why are you walking so slow?’ I definitely feel like my time was more joyful. We smiled! We got to show off our personalities.”

“I met Temi Otedola through DJ Cuppy but she did not...