Several worried TikTok and Twitter users have taken to the platforms to check on the young star after baseless rumours on the internet claimed he passed away on the road following an accident.

We are here to tell you not to fall for these claims!

The rumors stem from a random TikTok that claimed out of nowhere that Jaden Smith had passed away.

Some people were led to believe that the Karate Kid star was involved in a car crash and many even started paying tributes to him.

Other TikTok users dug deep and quickly found out that it was yet another celebrity death hoax.

They have warned fellow users on the platform to stay away from these false rumors after establishing that isn’t true.

Jaden’s latest tweet amid rumors about his death left some fans more confused as they couldn’t figure out what it meant.

Jaden did not provide any further explanation about his post, which got a few fans worried. 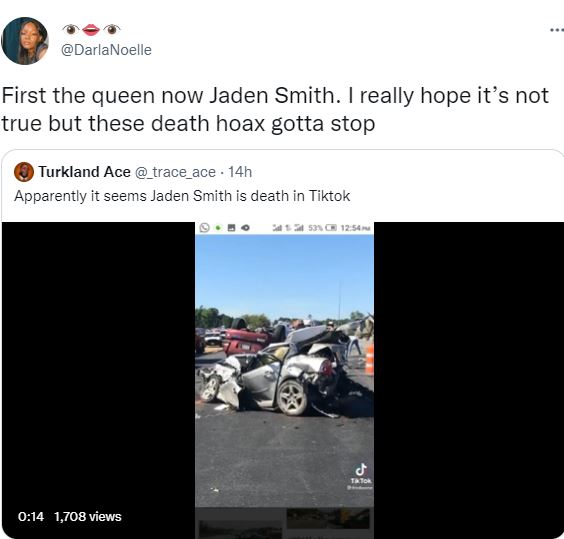 But, Jaden’s tweet is proof that he’s very much alive as opposed to what has been going around on TikTok over the last few hours.

Jaden’s fans rushed to Twitter to put an end to the hoax about his death as rumors started gaining a lot of traction.

One tweeted: “So, Jaden Smith is alive. Wondering why a group of TikTokers announced him dead in a car crash. Nsereko bill should go address those careless people.”

“I checked Will Smith’s page several times, Jada’s page and Willow’s page I think it’s just a popularity stand! Jaden Smith is alive and kicking trust me!” another wrote.

One irked fan said: “To those who put up that hoax story saying Jaden Smith died in a car accident, you’re all some next level sick. Imagine the agony his family must have gone through until they confirmed it was a hoax. 1 minute, 5 minutes, 1 hour. Y’all need to check yourselves.”