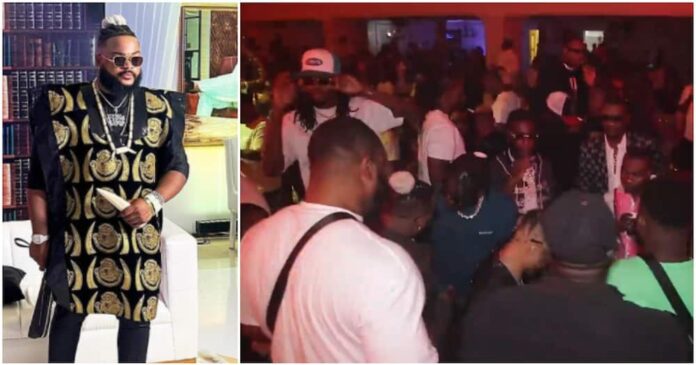 In a viral video, BBNaija winner, Whitemoney was allegedly bounced from meeting Grammy award winner, Burna Boy in a party in Lagos.

In the viral video, Whitemoney was spotted standing very close to Burna Boy’s team as they were chilling in a party hosted in Lagos. Whitemoney who could not get closer to the singer as it seemed he wanted to exchange greetings with Burna Boy, was intercepted by one of Burna Boy’s bodyguards.

Despite the unfair treatment he got from Burna Boy’s Men, Whitemoney did not lose his composure after being bounced from meeting the singer, instead he was sipping his drink while walking away.

This has triggered reactions from people, some who think White money was poorly treated. Whereas some admired BBNaija Whitemoney’s composure in the face of such mistreatment, some berated him for going to a place he was uninvited.

Photos: Cossy Orjiakor Flashes Tummy, Legs As She Poses With Her...