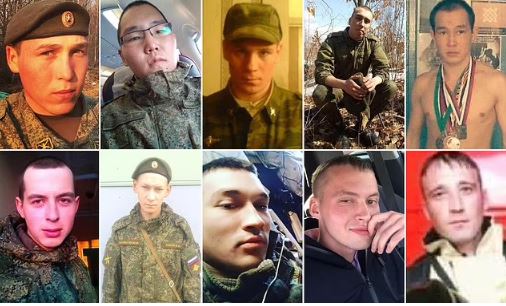 Ukrainian military officials have pictured and revealed names of Russian soldiers dubbed the ‘Despicable Ten’ who they accuse of carrying out war crimes in Bucha.

The Ukrainian Ministry of Defence released the names and faces of the men, stating: ‘Ten Russian butchers from the 64th brigade have been identified and named suspects responsible for committing the Bucha massacre.

This unit [has] been awarded for its atrocities, and returned to the battlefield. Justice for war criminals is inevitable.’

Horrific images of dozens of bodies in civilian clothes lying in the streets, some with their hands tied behind their backs, in Bucha and other towns around Kyiv, shocked the world when they emerged earlier this month. There were also reports of mass rapes.

Amid global outrage over the killings, the leader of the ‘Butchers of Bucha’ Russian brigade was promoted from Lieutenant Colonel to full Colonel last week.

Ukraine Prosecutor General Iryna Venediktova said today: ‘We will not stop until we bring each of them to justice.’

The Prosecutor General’s office and news agency Slidstvo scoured the internet for the personal information of the ten men.

Aged between 24 and 33, the corporals, sergeants and privates in the 64th Motorized Brigade are now thought to be fighting in the Donbas.

More than 400 mutilated, tortured and murdered corpses were discovered in Bucha days after reports emerged of widespread war crimes in the Kyiv suburb as Russian troops withdrew.

It came despite his men standing accused of gang rapes, tortures and civilian executions.

Soon after receiving the honours, the unit was then redeployed to the eastern Donbas front, one of the most dangerous in the conflict.

Deadly battles are taking place as Moscow’s forces attempt to surround Ukrainian troops who are proving a determined line of defence against Russia’s push from the east.

Analysts say Putin has deliberately sent them to the front lines in order to make them disappear.

Suretha Brits to serve 25 years for murdering her hotelier husband